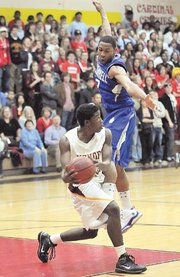 A free throw by Antonio Rouse pulled the Cardinals to within three with 2:41 remaining in the fourth quarter, but could get no closer. O’Connell closed the game on a 9-3 run.

"You’ve got to give them credit for making plays," said Ireton coach Neil Berkman, who added the Cardinals had been within four points in the fourth quarter against five of their six conference opponents at that point.

Ireton lost to St. Mary’s Ryken on Tuesday, dropping its record to 5-10 overall, 0-7 in the Washington Catholic Athletic Conference. The Cardinals host Gonzaga at 7:30 p.m. Friday.

"I think we’re getting close," Berkman said. "We have to learn how to get over the hump. … We’re not playing poorly … but we’re not getting the results from the ledger."

The T.C. Williams girls basketball team traveled to West Potomac on Tuesday and beat the Wolverines 60-48, improving its record to 5-9, 3-5 in the Patriot District.

Charnelle Huggins scored a team-high 16 points for the Titans. Jasmine Norman scored 15 points and Sade’ Barber finished with 12 points, going 8-for-8 from the free-throw line. Head coach Cavanaugh Hagen in a text message said the team is "still working on consistency and controlling our transition game."

Registration has begun through March 15 for the Alexandria Department of Recreation, Parks and Cultural Activities' Youth Girls Fastpitch Softball for girls ages 5 - 16 years old and Youth Baseball Program for boys 5 – 8 years old. Anyone interested in registering should pick up a registration form from any of the neighborhood recreation centers or contact the Youth Sports Office at 703-746-5402 or go on the department's Web site at www.alexandriava.gov/recreation. Registration fee is $25.00.

Mount Vernon High School Girls Basketball 11th Annual Spaghetti Dinner and Silent Auction will be held on Saturday. Tickets are $5. See a student athlete from the girls basketball team or contact Terry Henderson at 703-619-3146 or Terry.Henderson@fcps.edu.

For registration information, go to mountvernonsports.org or contact Luke Sable at lcsable@fcps.edu or by calling 703-405-5497.

Northern Virginia Baseball Umpires Association (NVBUA) is in need of officials for baseball and volleyball. Umpires are needed for colleges, men’s leagues, high schools and youth recreational leagues. Experience is helpful but not required. Formal classroom and on-the-job training will be provided. Classes will begin in mid-February. Umpires are needed for all communities in the greater Washington D.C. Metro area. Support local community's sports leagues by signing up. Call Ken Williams (703-400-3232) for more information or go to umpires.org to fill out a "New Ump" form.

Fairfax Adult Softball (FAS), the largest softball organization in the area, is seeking umpires for our adult slowpitch softball leagues in Fairfax County. Umpires net pay starts at $25 per one-hour game and are paid monthly. Experience is desired but ASA training is provided beginning early February. Flexible scheduling is based on availability. Contact FAS at 703-815-9007 or email to: office@fairfaxadultsoftball.com.

The NoVA Flash, a 14U fast-pitch girls softball travel/tournament team, is looking to add a few committed players from the Northern Virginia area for the 2010 Spring-Summer season. Formed late last summer, the Flash participated in four tournaments during the Fall 2009, compiling a record of 12 wins and 7 losses, with one second place tournament finish. At least one additional pitcher is needed to augment the current staff, as well as defensive players with solid skills and strong bats. The Flash uses practice fields in the McLean area. Players, 13 or 14 years old as of Dec. 31, 2009, who are interested in learning more about the NoVA Flash or arranging a tryout during Saturday afternoon winter batting practices should contact coach Mike Wheat at wheatsbaseball@aol.com, or by calling 703-966-3805.