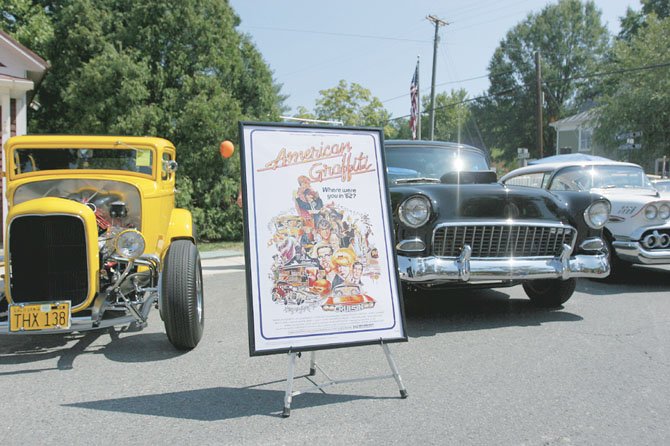 In the past, the Clifton Car Show has featured the cars seen in George Lucas' 1973 movie “American Graffiti.” They are, from left, a 1932 Ford Deuce Coupe, a 1955 Chevrolet and a 1958 Chevrolet Impala. Photo by Tim Camarda

Besides being a longtime Clifton resident and its former mayor, Jim Chesley is also a classic-car aficionado. He’s president of the Custom Cruisers of Northern Virginia, and the group is putting on a car show to benefit a children’s hospital.

The event is slated for Sunday, April 29, from 9 a.m.-3 p.m. (rain date, May 20), outside the Jukebox Diner, 8637 Sudley Road in Manassas (across the street from Prince William Hospital). And all proceeds go to Children’s National Medical Center in Washington, D.C.

“It’ll be one of the first, big car shows in the area this year,” said Chesley. “It’ll be a lot of fun; there’ll be plenty to eat and a deejay will play 1950s-’60s music.” The event is free for the public to attend, and parking will be available in a designated lot at Prince William Hospital.

The show will feature a variety of cars, trucks and motorcycles, including a 1950 Mercury, 1931 Ford hot rod, 1957 Volkswagen convertible and a 1967 Nova. Said Chesley: “There’ll be everything from antique cars to hot rods to new ‘muscle cars’ like Mustangs, Camaros and Corvettes.”

Gift-card door prizes will be given by Jukebox Diner and Roy Rogers, and attendees may vie for a 50-50 cash raffle, with half the proceeds going to Children’s National Medical Center and the other half to the raffle winner.

All registration will be done at the show; the cost is $15 to participate. All participants will receive a commemorative dashboard plaque of the event for their vehicles. Twenty-five awards will be given to the best vehicles in various categories, and the participants will choose 20 of the winners.

“We want to turn this into an annual show here,” said Chesley. “This will be the Custom Cruisers’ 26th anniversary spring car show, but the first at this location. We hope this will grow into a huge event like Clifton’s Labor Day Car Show.”

For more information, call Chesley at 703-830-2129 or go to www.customcruisersnova.com.

“We’re looking forward to a great turnout,” he said. “We want to make as much money as we can for Children’s National Medical Center.”