Nancy Larsen Turner, 83, formerly of Alexandria, died on March 2, 2012 at her home in Boonton, N.J. Born in Ogden, Utah, in 1928, she spent her childhood in Yellowstone Park, Wyoming, where her father worked for the Park Service. She married Calhoun Harris Turner in South Carolina in 1956. After his death in 1970, she lived and worked throughout the United States and in Calgary, Alberta, Canada. 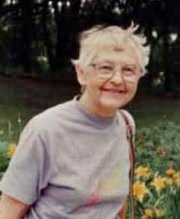 Nancy was a registered nurse, then earned a master’s degree in education and worked in the field of continuing education. After retirement she lived in Damascus, Syria before moving to Alexandria where she was a volunteer at the Charles Beatley Library. In 2010 she moved to Boonton, N.J.

In her 70s, Nancy began traveling around the world on cargo ships with such journeys as through the Great Lakes, across the Atlantic Ocean, back and forth across the Mediterranean Sea several times, through the Suez Canal and Red Sea, and into the Indian Ocean.

Another trip took her through the Panama Canal and down the west coast of South America. She visited ports in Cuba, Portugal, France, Spain, Italy, the Netherlands, Israel, Egypt, Pakistan, and India, in addition to Colombia, Peru, and Chile. Often she would be the sole female on the freighter and occasionally, she would be the only passenger. Amsterdam was one of her favorite destinations. Nancy’s travels inspired her to write a book, “There’s No Thunder at Sea” which she finished shortly before her death. Its publication is forthcoming.

She is survived by a son, Nathaniel Turner of Austin, Texas and two daughters: Faith Turner of Richmond, Va. and Valerie Turner and her husband Muhammad Hozien of Boonton, N.J. She is also survived by her siblings Joel Larsen and his wife Judy of Burlington, Vermont; Carol Bringham and Lois Walker of Alexandria, Va.; and Gary Larsen and his wife Sharon of Stamford, Conn.

Services were held in the Islamic Center of Passaic County and she was interred in Laurel Grove Cemetery in Totowa, N.J. on March 2, 2012. Friends are invited to an Alexandria celebration of Nancy's life on April 28 between 11 and 3 at Lois Walker and Carol Bringham’s condo at 1115 Cameron Street, Unit 104 (fronting on North Henry Street). Friends will be able to remember Nancy and share these memories.