Centreville — Since he was a boy, William Garrett knew he’d grow up to be a firefighter. Although he and his family have lived in Centreville six-and-a-half years, he was born and raised in Alexandria’s Gum Springs community — and that’s where the spark was ignited. 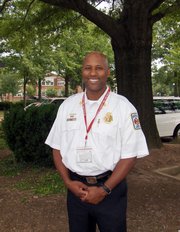 “Four generations of my family lived there,” he said. “When I was a kid, my friends and I would play basketball with some of the firefighters at the Mount Vernon Fire Station. I told them I’d be a firefighter someday, but they told me to go to college and get a good education first.”

Garrett followed their advice and has now been with the Fairfax County Fire and Rescue Department for 23 years. And he hasn’t just done the job — he’s excelled. In 2009, he was named the county’s Firefighter of the Year. In June, he was promoted to deputy fire chief; and on July 28, he began supervising 37 fire stations and 350 personnel throughout the county.

“I’m very humbled by it,” he said. “Sometimes we don’t see our own potential; but every step of the way, someone did. They offered me some type of advice or guidance — and I’ve taken hold of it.”

That realization made Garrett see the direct connection between the Fire Department and the community. “It’s still there today, and it gave me a different perspective on community outreach,” he said. “I know it’s not just about delivery of service. It’s also about giving sound advice, mentoring and communicating with a young audience.”

After graduating from West Potomac High, Garrett joined the Franconia Volunteer Fire Department. Nine months later, he was hired as a county firefighter. Attending NOVA part time, he eventually received an associate’s degree in administration of justice. Next came a bachelor’s from GMU in foreign language with a concentration in Spanish — and with good reason.

“What we do makes a difference.”

“About 10 or 15 years ago, as a firefighter, there was an unconscious Hispanic child and a frantic mother trying to communicate with us,” said Garrett. “We had to go through a language line to understand her, and it pained me that we couldn’t speak with her directly.”

He began his professional career at the Dunn Loring station in 1989, riding on fire engines. He also became a paramedic and has been one for 22 years. And, he added, “It’s even more important now as the population ages and increases.”

Garrett was a paramedic at the Reston station and became an EMS sergeant at the Lorton station. (That title was later changed to EMS lieutenant). Afterward, he became a fire investigator. “It was something different, and I thought it would be cool to try to figure out why someone would start a fire,” he said. “That helped me with fire suppression because you’ve got to know how and where fires start so you can put them out.”

That job also set the foundation for Garrett moving up the ranks and later becoming a fire lieutenant. “I loved it; it was a typical ‘whodunit,’” he said. “Sometimes, an anomaly in a piece of equipment causes a fire. But we also see a lot where caution, intervention or education could have changed the outcome dramatically.”

What it taught him, said Garrett, is the importance of “maintaining a situational awareness of what’s going on and how things work. That’s why I’m big into community outreach and fire prevention — taking the time to educate folks about safety. It’s something subtle, but it speaks volumes.”

He said it can be something as simple, yet vitally significant, as advising residents to move hot barbecue grills on balconies and decks away from the house — or reminding them to keep space heaters away from combustibles. So, said Garrett, “Every time we have a citizen contact, we use it as an opportunity to educate.”

Then, promoted to fire lieutenant, he moved to the Woodlawn station on Richmond Highway. “It was a dream-come-true because it’s where I grew up,” he said. “Then I returned to Franconia — where I’d volunteered.” This time, though, he was an officer.

Afterward, a position became available for a captain in the Hazardous Materials and Investigative Services section and, following another promotion, the job was Garrett’s. He later opened the Crosspointe station and, in March 2007, he said, “I got my dream job as commander of the Penn Daw station in Alexandria.” 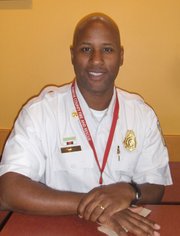 There, he was thrilled to turn that station into the focal point of that area’s community outreach. Furthermore, he said, “It was great serving along the Route 1 area — a place I had a stake in and was involved with.” Then in January 2010, Garrett was promoted to battalion chief of the Fairfax Station/Clifton/Burke/Crosspointe/Pohick area. He supervised 40-50 people providing emergency services out of six different stations.

“It’s a whole different look at emergency services,” he said. “It required me to think more strategically. Instead of just being focused on the task or on firefighting tactics, I had to consider the impact to the community. I had to make sure our personnel were well-trained and the equipment well-placed so that, when calls came in, we were ready to go.” Garrett also monitored the radio to ensure that, when one station was out on a call or away training, another unit was covering its service area.

In October 2010, he was assigned to work on a special project to modernize Fairfax County government’s finance and human-resource systems. His participation resulted in the final product taking into consideration the Fire Department’s special needs as a 24/7 service.

Then on June 28, Chief Ronald Mastin promoted Garrett to deputy fire chief, placing him in charge of C-Shift operations for the entire Fire Department. As such, he’s become a senior staff member and an integral part of the department’s core leadership. And as always, he takes his duties seriously.

“I’m responsible for the overall, day-to-day operations and management of 350-plus firefighters,” he said. “And I’m now in charge of the seven battalion chiefs.”

Garrett will visit all the stations under his command and plans to “continue the chief’s objectives and motivate the shift to do that, as well. And because firefighters influenced me at the start, I want to support the community’s needs — whether by collecting backpacks or coats or doing a food drive. I want to support the residents.”

And he’s not the only one in his family who feels that way. His wife Lauretta is a police MPO with the Sully District Station and, in January, she was honored as Officer of the Quarter. During the ceremony, her station commander, Capt. Purvis Dawson, told her, “You’ve set a standard for others to emulate. Each day you pin on your badge, you make Fairfax County a better place.”

The Garretts have been married 15 years and have two children, 13 and 11. Dad’s also an assistant SYA basketball coach for their children’s team. Serving the community is important to the couple, and that’s why the new deputy fire chief is so excited about his new position.

“I love it because we’re such an integral part of society – what we do makes a difference,” said Garrett. “It’s a meaningful job, and I know that what I do makes a direct impact.”