A Life Lesson in Giving Back
Votes

A Life Lesson in Giving Back

My father was born in a small town in the Andes mountains region of Venezuela. He was one of 22 brothers and sisters from the same parents. At the age of 19 he came to this country with $280 in his pocket and the dream of a better life. He worked as a bus boy and waiter, learned English, and went to school. He graduated from Northern Virginia Community College when I was 5 years old. He then took one class a semester at George Mason University every year, until he graduated from college one month before I graduated from Robinson High School in Fairfax. As a result of his achieving the American Dream, my father was able to change the lives of my entire family in Latin America. 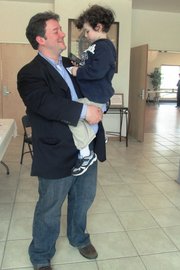 My mother was a teacher and guidance counselor in Arlington Public Schools for over 20 years. For most of her career she worked with ESL and immigrant children at Washington & Lee High School. As a direct result of her efforts, over 1,000 children, who might have otherwise fallen through the cracks, were able to continue their education after high school and graduate from college.

Throughout my life, my parents reminded me of the value of public service and taught me that if you have the opportunity, you should always give back to your community. My father also never hesitated to remind me that in the U.S. it is possible for the son of an immigrant to have the opportunities I have had—to work for the governor of Virginia, as a presidential political appointee, and to be elected to the General Assembly.

My mother and father touched the lives of countless people in our community. Every day I hope to honor them and live by their example.

With that in mind, I have fought efforts to pass anti-immigrant legislation in Virginia. Today, everyone agrees that we need comprehensive immigration reform that is tough, fair and practical. However, that reform must come at the federal level. We do not want or need a patchwork of immigration laws from state to state—nor do we want an unworkable patchwork of rules from locality to locality. These attempts in Virginia to pass constitutionally questionable Arizona or Alabama-style legislation only serve to unnecessarily make us appear less tolerant and put us on a slippery slope towards hurting business and lowering state revenues.

I am proud to have introduced the Virginia DREAM Act. This legislation would allow undocumented children—who in many cases know no other home than Virginia—to receive in-state tuition if they meet certain strict criteria. Similar language was included in executive orders by Governors Warner and Kaine and similar legislation recently passed the State Senate. I will continue to fight for the DREAM Act until it becomes the law in Virginia.

Working with House Republicans I am also happy to have helped pass legislation allowing legal immigrants who have lived in Virginia for less than five years to receive prenatal health care coverage under the state Medicaid and FAMIS (Family Access to Medical Insurance Security Plan) programs. Prenatal care improves the health outcome of the child and reduces the neonatal and long-term health costs for the commonwealth.

Over 100 languages are spoken in the 49th District. There are 58 languages spoken at my local high school. This amazing, vibrant tapestry of cultures enriches our community and the commonwealth immeasurably. We should do everything we can to embrace these new immigrants who bring so much to Virginia.

Alfonso Lopez is the first Latino Democrat ever elected to the Virginia House of Delegates.