McLean — The McLean-based Safe Community Coalition, which primarily serves the students in the Langley and McLean High School pyramids, will host a forum which will examine the issue of teen dating violence from a number of angles. The event, titled "What’s Love Got to do With it?: Healthy Relationships and Dating," will take place at McLean High School Feb. 9. 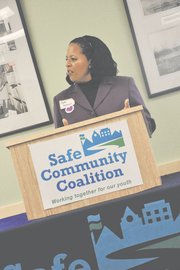 "The term ‘dating abuse’ often brings to mind terrible stories about the victims, but often times the early warning signs go unseen," said Nyka Feldman, executive director of the coalition. "Dating violence is a reality for many people, and it’s an issue that requires heightened awareness. Approximately one in three teens in the United States will be a victim of physical, emotional or sexual abuse from a dating partner."

SCC board member David Crystal pointed to another statistic that he found disturbing.

"What’s equally disturbing is that of those teens that are in an abusive relationships, only one third ever talk about it, report it," he said. "That means two-thirds of the abuse that you and your friends suffer never gets reported."

The program is being hosted in conjunction with the McLean, Langley and Thomas Jefferson High School for Science and Technology PTSAs, as well as The Madeira School. It will include a performance from Deana’s Educational Theater about the issues, attitudes and beliefs surrounding dating and a forum featuring medical and psychological professionals. Lynne Russell, founder of Dating Abuse Stops Here and mother of a victim of dating abuse, will also speak.

"This event will hopefully speak to the victims, the abuser and the bystander, who is often the most important person," said Mimi Wiseberg, a social worker who will speak on the panel. "We want to have a community conversation that will help us come up with some organic ideas about abuse."

On Friday, Feb. 3, from 3 to 8 p.m. and Saturday, Feb. 4 from noon to 4 p.m., the a portion of sales made at the McLean Books-A-Million days will go toward the SCC’s Healthy Relationships Programs. Books-A-Million is located at 1451 Chain Bridge Road.

On Saturday, Feb. 4, from noon to 8 p.m. a portion of sales at Chicken Out in McLean will support SCC’s Healthy Relationships Programs. Chicken Out is located at 1443 Chain Bridge Road.

February has been named Teen Violence and Awareness Month, and several local businesses will be working with the Safe Community Coalition to raise money and awareness leading up to the forum.

School Board Chairman Janie Strauss (Dranesville) said that gaining an understanding about healthy relationships is critical in the teenage years.

"As social folks, we do hope to have real relationships with one another throughout our entire lives," she said. "It’s during these critical times that we learn the give and take of a normal relationship."

The event will take place at McLean High School Thursday, Feb. 9 at 7 p.m. More information is available at www.safecommunitycoalition.org.