This Week in Potomac
Votes

This Week in Potomac 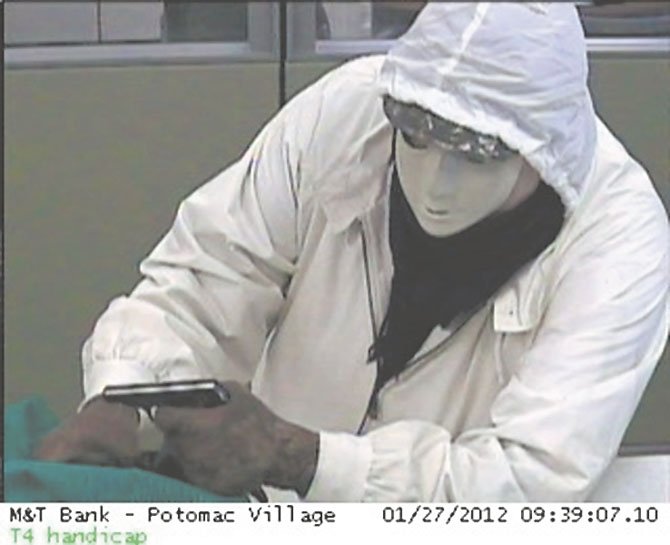 Police released this photo of a suspect in the robbery of the M&T Bank Friday morning Jan. 27. The suspect carried a black handgun and umbrella, according to police reports.

The FBI and Montgomery County police are investigating a bank robbery that happened on River Road in Potomac Village on Friday, Jan. 27.

The preliminary investigation revealed that the suspect “approached the teller displaying a handgun and demanded cash,” according to county police reports.

The six-foot tall suspect carried an umbrella during the robbery, held a small black handgun, and wore a white plastic mask that covered his face. He was dressed in a gray hooded sweatshirt, a gray urban camouflage colored baseball hat, gloves, black scarf and white tyvek type jacket and pants. He was described to be a white male with a medium to heavyset build.

“After the suspect obtained an undisclosed amount of cash, he fled on foot via the front door towards River Road to the rear of the shopping center,” according to police.

No one was injured during this incident.

Detectives from the Montgomery County Police Major Crimes Division – Robbery Section and the Federal Bureau of Investigation (FBI) are investigating.

Anyone with information should call the Major Crimes Division — Robbery Section at 240-773-5100.

The County Council’s Public Safety Committee is scheduled to discuss the School Bus Safety Camera Bill, 37-11 at its worksession on Feb. 2.

The bill would allow the county to authorize police to install and operate cameras on county school buses in order to catch drivers who illegally pass stopped school buses.

The Maryland State Department of Education reported that 7,028 drivers overtook stopped school buses in 2010, according to a survey released in February 2011. In Montgomery County, Chief Thomas Manger reported that police issue about 500 citations each year even though 1,645 drivers ignored the stop arm on school buses, according to County Council documents.

Violations would be recorded with images similar to red light cameras or speed monitoring cameras and punishable by a maximum $250 fine.

“Fine revenue is intended to at least cover program costs. County revenue in excess of program costs must be used to support public safety programs, including pedestrian safety,” according to council documents provided by the Office of Management and Budget. “It is likely that violations are currently under-reported.”

The Montgomery County Board of Elections needs election judges to serve at polls in the Presidential Primary election on April 3 and the general election on Nov. 6.

Judges must be registered to vote in Maryland and be able to speak, read and write English. Election judges may not be a candidate or hold any public or private office and can not serve as a campaign manager or treasurer for any campaign.

Alternates and election judges bilingual in Spanish are needed throughout the county. Training will be provided and all judges will be compensated.

In “Tots in Transition,” [Potomac Almanac, Jan. 25, 2012], Ed Jurgrau should have been identified as the founder and former owner of Shoe Train.