Local entrepreneur wants to change processed food industry one bowl at a time.

Early in Katharine Mardirosian’s post-college life, she considered a career in international relations. A Harvard graduate, Mardirosian traveled and worked in eastern Europe and New York. She met her future husband while working in Romania. After the couple came back to the area that Mardirosian grew up in, McLean, in 1994. Two years later, Mardirosian got her M.B.A. at the University of Maryland, and her entrepreneurial spirit kept bobbing up. Nowadays, Mardirosian owns her own business, an innovative one, at that, preparing and selling from-scratch soups made with locally-sourced ingredients. 100 Bowls of Soup is Mardirosian’s line of seasonal soups. 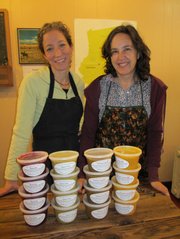 "My mission is to make the healthiest, most nourishing, and most flavorful soup I can out of local and organic ingredients," said Mardirosian, who lives in McLean but makes her soups out of the licensed kitchen at Maple Avenue Market. Fresh, healthy soups are something she thought was really needed.

Living in Romania inspired Mardirosian’s perspective. Local cooks, out of necessity, used fresh ingredients and cooked everything the family ate. "They knew how to cook and to cook really well," said Mardirosian. "There was very little processed food."

BEFORE RELOCATING her work station to Vienna, Mardirosian used a church’s licensed kitchen in McLean. But cooking at Maple Avenue Market offers opportunities to Mardirosian and her assistant cook, Meredith Haines of Vienna, that a church kitchen doesn’t offer. The women, at Maple Avenue Market cooking every Tuesday and Wednesday, get to meet the shop’s customers, as well as suppliers. That kind of community environment elevates the cooking process to something more meaningful.

Because the ingredients are "local," they are, by definition, "seasonal," as well. You can’t make gazpacho here in the winter if you buy local, Mardirosian said. The beef that goes into Mardirosian’s chili and goulash is pasture-raised from Polyface Farms in Staunton, Va.

Mardirosian and Haines make two soups a day, two days a week, in small batches of 40 – 60 pints. "When you’re cooking for a small number of people, not mass-producing it, it’s more meaningful," said Mardirosian.

"My bigger mission is to change the processed food industry one bowl at a time."

She doesn’t rely on salt for flavoring; she uses herbs and spices. And for her from-scratch stocks, she roasts the bones first for the meat stocks, and then boils them to extract the essence. 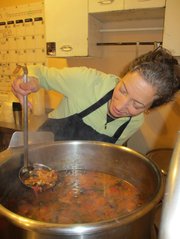 Katharine Mardirosian, the force behind 100 Bowls of Soup, checks on a kettle of simmering minestrone.

"Pay attention to every ingredient that goes into what you eat," Mardirosian said. "Every ingredient should matter, and whenever possible, cook from scratch."

Chris Guerre, owner of Maple Avenue Markets, farms a lot of the produce he sells, and it’s from him that Mardirosian buys a big share of her ingredients. From Deepa Patke, Mardirosian buys the vindaloo spice packages that go into sweet potato vindaloo soup.

MARDIROSIAN went through McLean schools as her two children, one a high school senior, the other a sixth-grader, are doing now. Haines, Mardirosian said, is connecting her to Vienna. So is Chris Guerre who actively supports the community and works to improve school lunches locally.

Mardirosian sells 100 Bowls of Soup at the Maple Avenue Market, the Organic Butcher in McLean, the Reston Farm Market in summers, Potomac Vegetable Farm in Vienna and at the newly-opened Mom’s Organic Market in Herndon. Stores set their own prices but Mardirosian believes the vegan soups typically sell for about $7 a pint and the meat soups and stocks for about $8 a pint. Quart special orders are accepted.

"I do this for the satisfaction of producing a product I really believe in," said Mardirosian. "And to provide someone with a wonderful, healthy and nourishing meal."