Engineering Firm Honors David Bulova as Legislator of the Year

On Feb. 3, Del. David Bulova (D-37) was honored by the American Council of Engineering Companies (ACEC) of Virginia, the state’s largest engineering firm association, at their 2012 Engineering Excellence Awards Gala, as Legislator of the Year for his work promoting dam safety during the 2011 Virginia General Assembly session. The award was presented by ACEC-Virginia President Don Sipher. 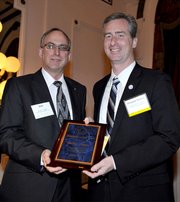 ACEC Virginia Executive Director Nancy Israel said, "In the past session of the General Assembly, there was an effort to exempt dams from periodic inspections under the Virginia Dam Safety Act. There were real safety issues involved. Delegate Bulova championed our cause and took the side of public safety."