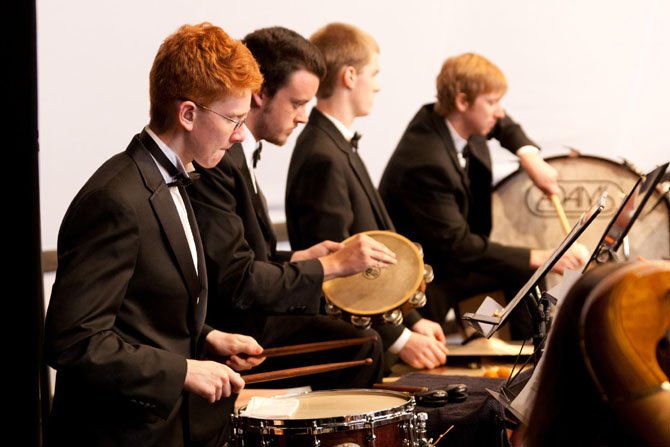 Second from the left, Kyle Brightwell played the tambourine for a youth orchestra. Photo Contributed

Reston — Reston native Kyle Brightwell is proof that, with hard work and perseverance, dreams can come true. The percussionist, who began studying music at the age of four, learned in January that he had won a coveted spot in the Boston Symphony Orchestra. To make the triumph even sweeter, his close friend Matt McKay of Fairfax also earned a position with the renowned orchestra during the auditions last month.

"They made the announcement and I was totally floored," Kyle remembers. "Still now, it doesn’t seem 100 percent real."

His mother, Kim, recalls the phone call they received at a quarter to midnight on Jan. 11. "Our daughter, Jenna, was still home from William and Mary on winter break and she and [my husband] Kevin and I were cheering and dancing," after Kyle shared his exciting news.

Kyle’s journey to the Boston Symphony Orchestra began many years prior. His parents, who had played instruments growing up, enrolled him (and later his sister) in group music lessons as a preschooler. Kyle admits he had to be coerced into practicing piano, but his instructor noticed he had excellent rhythm. She commented often that he would make a great percussionist.

"If you want something bad enough and you have enough ability at it, all it takes is a lot of hard work. If you’re willing to put that work into it, you can really do anything you want."

Kyle, like many young children, was attracted to instruments one could hit. Even better, he discovered he had a natural ability and learned new skills quickly. He auditioned for the Sunrise Valley Elementary band in 5th grade as a percussionist and was soon perfecting his proficiency on the snare drum, glockenspiel, bass drum, and cymbals. Unlike the piano, percussion practice didn’t feel tedious. "Back then, it was so fun for me. I threw myself into it completely," he describes.

In addition to Area Honor Band in elementary school and District Band while at Hughes Middle School, Kyle won a solo competition through the Fairfax County Band Association in 8th grade. Impressed by the percussionist who performed in the competition at the high school level, he made the decision to become a professional musician.

"At the end of eighth grade, he came to us and said, ‘Mom and Dad, I want to do music for the rest of my life. Is that OK?’" his mother says. Kyle’s percussion instructor at the time, Aubrey Adams, with the Air Force Band, assured his parents that Kyle would be successful as a musician. The Brightwells knew it would be important to support Kyle in all of the extracurricular music and orchestra activities he could find.

Kyle notes that there is a "track" for high school students interested in music. While at South Lakes High School, he joined various activities and programs, including District Band, All-Regional Orchestra, State Band, State Orchestra, and Youth Orchestra. He also participated in National Symphony Orchestra’s fellowship program (where he met Matt McKay) and summer programs through Tanglewood Institute and Juilliard.

GRAYSON FORE has worked at South Lakes High School as a music educator and band director for thirteen years. He was impressed by Kyle’s intelligence and persistence as well as his bright personality. "He didn’t settle to just understand something; he wasn’t comfortable until he had mastered it," Fore said. "As a freshman he was immediately one of the top musicians in the area. He earned all-state honors his freshman, sophomore, and junior years."

Fore recalls how Kyle would run down to the band room to practice whenever he had a few minutes between classes. "He truly loved playing and experiencing the different things music had to offer. His passion for music was really incredible," Fore said. 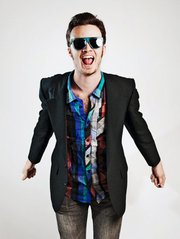 Kyle Brightwell looks forward to a long career with the Boston Symphony Orchestra.

His mother agrees. "Kyle would practice [at home] two to five hours each day and we would have to tell him to stop practicing and go out to play or go to bed."

Even with talent and dedication, Kyle experienced his share of disappointments. "Kyle was good at balancing himself," Fore says. "Just because he didn’t finish first or was the number one choice he always knew there was value from it, always learned from it and so that’s why I think he’s been as successful as he is."

"Despite the ups and downs of auditions for district bands, regional bands, and various competitions, he always wanted to keep going," his mom concurs.

She can recall an audition in 7th grade for All District Band for which Kyle was chosen as an alternate. He vowed to master every snare drum rudiment and ended up in first place the following year. Similarly, Fore remembers the way Kyle would set goals to perfect his skills in a particular percussion instrument, such as the timpani, and then proceed to win highest honors for that instrument in a competition.

FOLLOWING HIGH SCHOOL graduation in 2006, Kyle attended Juilliard School in New York City. He found himself surrounded by "tons of people gunning for what they want to do, amazing players, actors, and dancers." The experience was both intimidating and rewarding—he credits his undergraduate years as the time when he found himself as a person and a musician. While at Juilliard, he taught private and group lessons to New York City youth through the Music Advancement Program (MAP) and participated in other community outreach programs.

At times he questioned if he would continue to pursue a career as a musician. "Music is a 24-hour a day career. If you’re a musician, you have to embrace that lifestyle 100 percent," he explains. Kyle wondered if he’d be better off with a job that he didn’t need to think about once the work day ended. He also asked himself if it was worth continuing down this path given the performance anxiety he often experienced during auditions.

PRIOR to his audition in January for a spot in the Boston Symphony Orchestra (BSO), he dedicated a week to practicing with his good friend Matt McKay, also a percussionist. The two rehearsed from nine in the morning until midnight, breaking only to eat. While Kyle estimates he can play about 100 different percussion instruments, he knew the BSO was looking for players proficient in the snare drum and cymbals. "We were trying to push ourselves as hard as humanly possible," he recalls.

When after the finals both men learned they had won, Kyle felt it was "like a Disney ending for us". Not only had he landed a spot with an orchestra recognized around the world, his close friend had as well. Kyle still can’t believe it’s happened exactly as they’d dreamed it would.

"We’re all so proud of him and of Matt, too," Fore mentioned. "I’m just excited for him because all his hard work has paid off. It’s so rare for people to earn these positions," he adds.

"When he auditioned for and was accepted into Juilliard and then thrived there, I think we really started to realize that he was one of the elite," his mother, Kim Brightwell notes. "Still, nothing is for sure until you get that call, ‘Dad, I got the BSO!’"

Kyle remembers the phone call home as "a really proud moment for me. It validated their faith in me that it would all work out."

"If you’re willing to persevere through the long path to get where he is, you have to have a real love and passion for music and be able to share that with others," Fore said. "Kyle taught me more than I think I taught him."

Kyle will officially start with the BSO in the fall. In the meantime, he’ll finish up his Master’s degree in Music at Boston University, serve as a substitute for the orchestra as needed, and continue side projects such as playing with the Whiskey Collection, a bluegrass band in New York City. While he is unsure what the future holds, he notes he would be happy playing in the BSO his whole life, until he can’t do it anymore.

Kyle has reflected on what lead him to this achievement and wishes he knew when he was a younger musician what he knows now. "If you want something bad enough and you have enough ability at it, all it takes is a lot of hard work. If you’re willing to put that work into it, you can really do anything you want."