Bracing for Massive Change Along the Route 1 Corridor
Votes

Bracing for Massive Change Along the Route 1 Corridor

Whether called it Route 1, Richmond Highway or Hyland Highway, it won’t be the same. 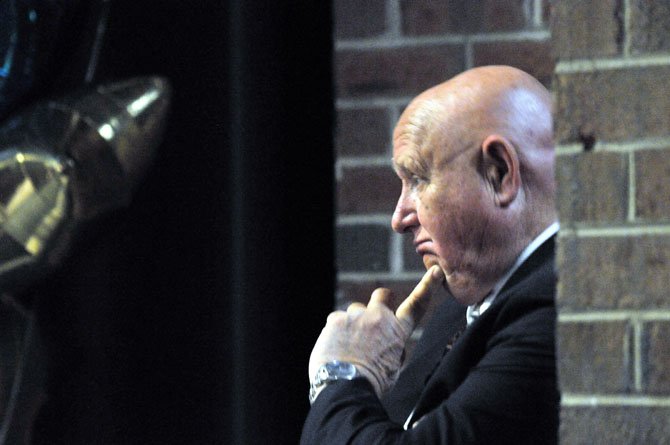 What’s in a name? As William Shakespeare once wrote, a rose by any other name would smell as sweet. Then again, the bard never got stuck in traffic. If he did, he might have something to say about the stretch of road connecting Fort Belvoir to Alexandria.

It definitely has something of an identity crisis.

Some people insist on calling it Route 1, an antiseptic designation that includes the entirety of a thoroughfare that stretches up and down the east coast. During the 25th annual Mount Vernon town hall last weekend, Supervisor Gerry Hyland explained that he preferred the name Richmond Highway, indicating that Route 1 had unsavory connotations. And yet it was U. S. Rep. Jim Moran (D-8) who suggested the most radical designation.

“I’ve got a suggestion for Route 1,” said Moran. “We should call it Hyland Highway.”

“Thanks but no thanks,” said the longtime supervisor, rejecting the congressman’s offer.

RICHMOND HIGHWAY was at the center of Hyland’s “virtual bus tour,” the highlight of the annual town hall meeting on the state of the Fairfax County magisterial district. Donning his traditional bus driver’s jacket, Hyland presented a series of PowerPoint slides to indicate that the region’s central business district is on the verge of dramatic change.

First, there’s the $180 million widening project that will transform a four-lane road to a six-lane road from Telegraph Road to Woodlawn.

Then there’s the long-awaited North Hill property, which is expected to finally have a site plan approved in March. The old Multiplex movie theater will be demolished in the next few weeks, and it will be replaced by a new Costco in spring of 2013. There’s the old Dairy Queen property that’s been rezoned for a retail shopping center. And Wegman’s will open in the spring of 2014.

The virtual tour featured stops at Fort Belvoir and several school sites. That meant that the “bus” occasionally stopped to pick up celebrity passengers. First on board was Col. John Strycula, garrison commander of Fort Belvior. He talked about changes that are taking place at the installation as a result of the 2005 Base Realignment and Closure Commission recommendation. In addition to adding a huge medical facility and creating a new museum, the installation added hundreds of new employees and contributed to the gridlock that was already plaguing Richmond Highway.

“BRAC is a very unique word in the English language,” said Strycula. “It’s a noun and a verb. To some people, BRAC is still a four-letter word.”

When Hyland’s virtual bus stopped to pick of School Board member Dan Storck, concerns moved from overcrowded streets to overcrowded classrooms. Storck outlined how the system is struggling to cope with the demands of a steadily growing student body. In the short term, he said, the county is ready to open a new middle school in the South County, which he suggested should be named for an author, writer or poet. In the long term, he said, the county has to deal with the crush of students.

THIS YEAR’S town hall represented the end of an era, as County Executive Tony Griffin is set to step down this spring. Before that happens, however, he will propose his final budget, which is sure to become the central focus for the coming months. Griffin said that 2012 will be the second year that property assessments will be positive overall, indicating that the economic recovery is underway in Fairfax County. And the county’s economic health would only improve more if the Federal Bureau of Investigation chooses an abandoned Springfield site as the site of its new headquarters.