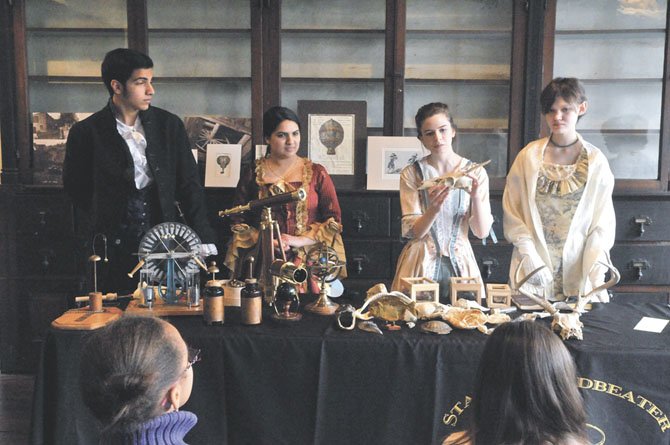 The students in the McLean High School Project Enlightenment will perform again in Alexandria, at the Apothecary Shop on Saturday afternoon, March 24. Photo by Louise Krafft.

Saturday afternoon, students from McLean High School in the Historical Reenactment Society, Project Enlightenment, performed before audiences at the Stabler-Leadbeater Apothecary Shop in Alexandria. Each of the students has researched an 18th century person who worked in science. The Magical Science of the Vacuum by Dr. Mesmer was explained and demonstrated by senior Nadeem Bohsali; Margaret Morris, a midwife and owner of an apothecary shop was portrayed by Alexa Tabackman; Mel McCalley reenacted the study that the naturalist Lucy Say of Connecticut worked on. A doctor, a spy and naturalist and others appeared throughout the afternoon. The students will return on Saturday, March 24, from 1 to 4 p.m. All 50 students in the program will be also performing at the Mount Vernon Estate over the Memorial Day weekend. A special event coinciding with the transit of Venus will take place at the Sully Plantation during the first week of June. The Project Enlightenment program was established in 1992, and is now a fully credited course within the Fairfax County Schools.