Book tells his experiences with human rights violations around the world.

Herndon — As a public servant for more than 30 years, Rep. Frank Wolf (R-10) has had his share of experiences. But it was a trip to Ethiopia in 1984 that he calls a "life changing experience," because it opened his eyes to human rights violations around the globe.

Since that trip, Wolf has traveled to the Sudan, Kabul, Romania, Beijing and more, witnessing some of the worst cruelty human beings are capable of. His travels inspired his recent book, "Prisoner of Conscience: One Man’s Crusade for Global Human and Religious Rights," which tells the story of his efforts to bring these crimes to light. 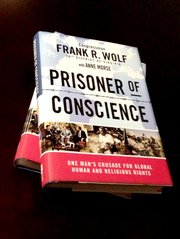 Rep. Frank Wolf (R-10) has written about his experiences dealing with human rights violations in his book "Prisoner of Conscience: One Man’s Crusade for Global Human and Religious Rights."

"During the ’80s, it seemed like there was always strong bipartisan support for human rights," Wolf said. "But I noticed at the end of the Bush administration, that really waned and during the beginning of the Obama administration the same thing happened."

Wolf said he has noticed the change that social media has brought about, especially with the uprisings in the Middle East over the last year, but he said it’s a mixed blessing.

"We’re almost hitting an information overload," he said. "It’s very hard now for governments to keep things quiet, a lot what we‘re finding out about what‘s taking place in Syria is because of social media. If we want to be engaged and change these governments, I think it’s easier now than it’s ever been, but the problem is at times there seems to be less interest."

Wolf’s experiences don’t all stretch back to ten, twenty, thirty years go. He recalled going to Beijing for the 2008 Olympics to meet with some religious leaders, and found they had been recently attacked. Other situations haven’t changed much either.

"The genocide in Darfur is still going on," he said. "You go over there right now, there would be women living in the same camps as they were the day I went there five years ago," he said.

He said he is frustrated at times with current attitudes towards human rights issues.

Wolf says his experiences have shown him that it is possible to enact change when it comes to exposing human rights violations, but that it will take a shift in attitude from the way things are currently going.

"The Declaration of Independence says all men are created equal, and have a right to life, liberty and the pursuit of happiness," he said. "I think when we advocate and speak out, it really can make a tremendous difference to people all over the world, as we would want someone to do if we were in the same situation."