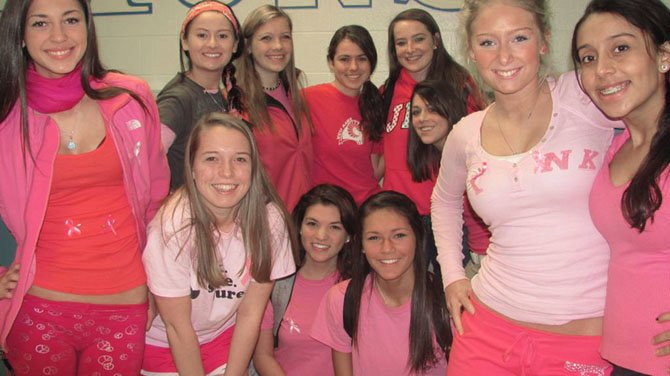 On Pink Out Day, Lauren Mason and Bahar Sayed were pleased to see many Robinson students dressed in pink from head to toe. Photo Contributed

There will be 226,870 new cases of invasive breast cancer among women in the United States, according to Susan G. Komen’s website. Given that early detection positively impacts one’s ability to survive this disease, Robinson High School juniors Lauren Mason and Bahar Sayed felt it was important to educate peers through their Distributive Education Clubs of America (DECA) chapter public relations project.

Her best friend Bahar Sayed remembers, "When Lauren’s mom was diagnosed with breast cancer, I was at her house every day and I saw how hard it affected the whole family. I saw it was really hard for her mother to come home from radiation and go on with her day and provide meals for [her children]."

Both Bahar and Lauren are advanced fashion marketing students at Robinson and participate in their school’s DECA chapter to learn how to present in front of different audiences and prepare press releases. Although neither is sure if they’ll continue to pursue marketing after high school, they are grateful for the opportunity to hone skills such as effective communication.

SARAH HINKHOUSE, Casey Hepner, and George O’Brien serve as DECA faculty advisors at Robinson. "They’re absolutely amazing and fabulous at what they do," Lauren describes. "They help us so much in everything and really guide us along in everything we do. They’re really passionate about their jobs."

Hinkhouse sees DECA membership as an opportunity for young people to learn how to interact with individuals of diverse backgrounds and occupations. In addition, they learn to conduct research to support their conclusions and recommendations. DECA also helps prepare students to become civically conscious.

Each year, a State Leadership Conference brings together DECA members from schools across Virginia. Participants can compete in role-play, written events, or chapter projects. At this year’s conference in early March in Norfolk, Lauren and Bahar will conduct a ten-minute presentation on their "Before It’s Too Late" campaign. The top three finalists will advance to an International Career Development Conference, in May, held in Salt Lake City, Utah.

Bahar and Lauren chose to focus on detection of breast cancer "before it’s too late" to spread awareness among their target audience, 14- to 18-year-olds. "I was never really exposed to breast cancer at all," Bahar admits. "The first time I heard about it was Lauren’s mom. I didn’t even know what it was until we started researching it and how it can be prevented through early detection."

Lauren agrees that she had limited information about it, until her mother was diagnosed, aside from a health class at school which provided guidance on self-examinations. The young women organized their chapter project to ensure that peers were aware of the importance of early detection.

According to advisor Sarah Hinkhouse, "Lauren and Bahar are very good students. They work hard, balance their time very well, and have a dedication that is uncommon in their age group…especially to a community service effort."

THEIR CAMPAIGN included an Awareness Week, during which DECA volunteers handed out breast cancer ribbons. Lauren and Bahar learned different strategies through marketing class and DECA to promote their efforts. "The point of the breast cancer ribbons is to raise awareness of our project. Everyone wearing them and walking around the school are advocates of our project because they’re showing everyone else that they’re aware of breast cancer," notes Lauren. Bahar adds, "[Students] still have them on their backpacks today." 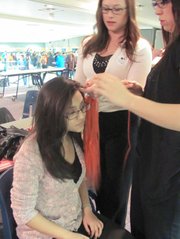 Awareness Week also involved shock candy, treats wrapped in a paper that provided a shocking statistic about breast cancer, which Lauren describes as "an interesting way to have our target audience learn about breast cancer and make it more memorable to them."

On Pink Out Day, which they advertised via a broadcast media outlet, "Good Morning, Robinson," students were encouraged to wear pink. Bahar and Lauren were pleased to see many students dressed head to toe in the color of the day.

Other endeavors included a "paint your face with a pink ribbon" event and "Before It’s Too Late" T-shirt Day. Bahar and Lauren partnered with Paul Mitchell School representatives, who donated 100 pink hair extensions for Robinson students to buy and wear. They raised almost $300 from the extensions, all of which was donated to breast cancer research.

IN ADDITION to school-wide awareness events, Lauren and Bahar’s campaign had a lobbying component. They sent packets of information to congressmen and women on Capitol Hill, describing their project and emphasizing bills that would improve the availability of mammograms to the general public. Lauren observes, "A lot of women don’t get mammograms because they’re not aware or educated or can’t afford them."

"We’ve gotten a lot of good responses from our classmates, especially DECA members," Bahar reports. Lauren agrees that classmates have been responsive and mature about the subject of breast cancer awareness, indicating they’d like to make an impact as well.

Hinkhouse reports, "They were able to get their peers and community members to think about early detection and to understand the importance of the process. The students were often talking about the activities and participating in their promotional efforts."

The campaign managers also "adopted" a Robinson family experiencing breast cancer by providing meals for three days. "We know how hard it is to go through radiation and come home and try to make meals," Bahar explains.

As part of the competition they’ll attend in March, the young women were required to prepare a 30-page paper detailing their campaign efforts. "We definitely wanted our project to be successful so we took an extreme amount of time," Lauren describes. They recruited 50 DECA volunteers and involved about half of the school in at least one of their awareness activities. Next, they’ll work on preparing for their 10-minute speech at the state competition as well as creating a display board that shows what they’ve done.

"For me, the most fulfilling aspect is to see these young adults achieve what they didn’t know was possible," Hinkhouse describes. "Whether they are attempting a role play for the first time or producing a research paper for a business to compete at the State Conference or even just attending a field trip to someplace they’ve never been…the risk they take and the reward from it is incredible." She and the other advisors will join the Robinson DECA competitors at the conference. "We were extremely lucky to detect [my mom and grandmother’s] cancer before it got to an extreme stage," Lauren emphasizes. "Some others are not as lucky." Hopefully, the campaign she organized with Bahar through their DECA chapter will ensure Robinson students are more aware of the importance of breast cancer detection before it’s too late. For more information about DECA, please visit http://www.deca.org/about/.