Alexandria — After a stretch of nearly six minutes without a field goal to open the second half, T.C. Williams senior Gaby Moss removed any doubt about the Titans’ season lasting longer than the first round of districts.

Moss knocked down back-to-back 3-pointers, extending TC’s lead to 19 points as the second-seeded Titans cruised to a 60-25 victory against No. 7 West Potomac on Feb. 14 at The Garden. TC advanced to the district semifinals and assured themselves of a berth in the Northern Region tournament. 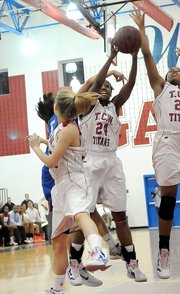 TC led 27-14 entering the second half when both teams went ice cold. The Titans and Wolverines each made one free throw for the first 5 minutes, 55 seconds of the third quarter before Moss got TC back on track.

"It was a moment where … collectively, the thought was, ‘OK, you know what? We’ve been playing around too much. Let’s go,’" Moss said. "After that, as a team, we just started making our shots, being aggressive [and] attacking the goal."

Moss finished with a game-high 17 points, including a trio of 3-pointers, and grabbed seven rebounds. Referred to as the "Offensive Assassin" by head coach Kesha Walton, Moss outscored West Potomac 17-15 through three quarters.

While the Titans’ offense struggled for stretches, their defense was stifling. After the Wolverines’ Caroline Kelly scored late in the second quarter, TC held West Potomac without a field goal for a stretch of nearly 14 minutes. After scoring one point in the third quarter and making six free throws in the fourth, the Wolverines snapped the streak when Georgia McBride scored with 2:54 remaining.

"That says a lot about [the Titans’] heart and commitment, to committing themselves defensively," Walton said. "… We were starting to get out of it a little bit, mentally, but [TC used] the defense to

get the offense going. I noticed once our defense started picking up, I know our offense is right behind it."

"One of our goals is accomplished: to actually go to the regional tournament, so the girls are very happy. I told them to enjoy that moment. Still, it’s not over yet."

"One of our goals is accomplished: to actually go to the regional tournament, so the girls are very happy," Walton said after the Titans beat West Potomac. "I told them to enjoy that moment. Still, it’s not over yet."