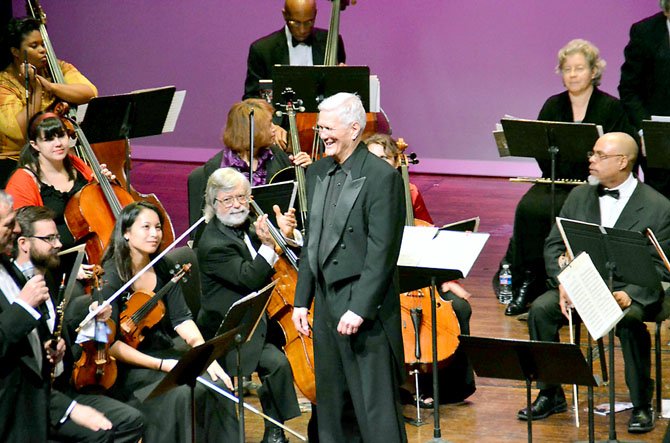 "It was a full house — 500 in attendance and $20,000 raised for our Beethovenfound Wounded Warrior Trust project," said H. David Meyers, organizer and host of the event.

James will conduct another performance by the BeethovenFound Philharmonic that is scheduled for Friday, March 16. It will be held at 7:30 p.m. at The John F. Kennedy Center for the Performing Arts and will feature the world premiere of the winning film of the World Music and International Film Festival True Bromance with the movie score performed live by the orchestra.

James is also scheduled to conduct the Memorial Day Tribute to Wounded Warriors on May 27 at The Great Meadow Event Center (5089-Old Tavern Road, the Plains, VA). It will feature members of the New York Philharmonic, Philadelphia Orchestra, Baltimore Symphony, and National Symphony and other professional symphony musicians to create a 200-member orchestra with a 500-strong chorus conducted by James. More than six major bands will perform on a specially constructed stage surrounded by risers for the chorus and two Jumbotrons will show the action.

There will be more than 100 corporate tents with free barbeque and beer trucks serving 30,000 guests. A Wounded Warrior softball team will play in front of the crowd.

There will be free wine tasting from over 30 wineries and an air show will fly overhead. There will be games and fun for children of all ages in a carnival-type atmosphere, and much more.

Meyers said, "Our goal that day is to raise more than a million dollars for Wounded Warriors and their families. Our overall goal is a ‘National Wounded Warriors Day’ and a national telethon to raise tens of millions of dollars in a single day."

In the meantime, James is busy conducting the Washington Metropolitan Philharmonic Association, which has the following concerts scheduled: