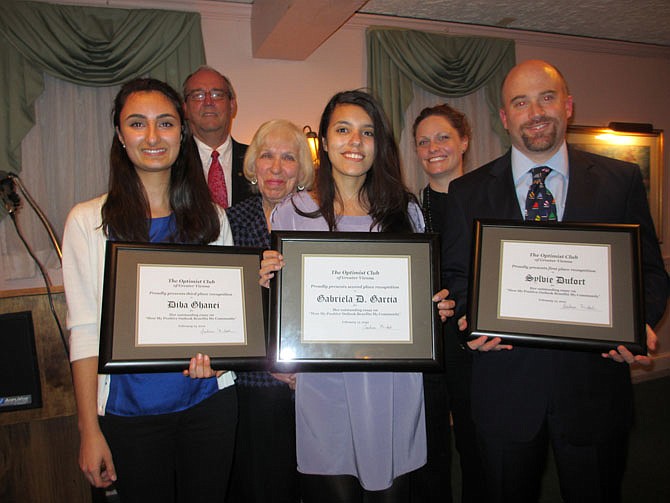 The Optimist Club of Greater Vienna awarded $600 to three local high school students at its Feb. 15 dinner meeting. The students were winners of the annual Optimists International essay contest, "How My Positive Outlook Benefits My Community."

Marshall career counselor, Gardner Humphreys, read Dufort’s essay and accepted the check and framed certificate on behalf of Dufort who was at a Marshall event she had previously committed to. Garcia and Ghanei read their essays to the club members and took home framed certificates, as well as award checks.

"I know that, one day, Haiti will change for the better."

DUFORT, as first-place winner, goes on to the capital-area competition where the top prize is $2,500.

Committee chairperson Barbara McHale, who has chaired the essay committee for 19 years, presented the winners and their awards.

Every year, on the first Sunday of the new year, Dufort’s family in Haiti hosts a dinner for about 300 impoverished children, and it is these memories that instill Dufort with optimism that benefits others. She sees the beauty of her native Haiti and back in the Vienna-area, she shares her culture with classmates, doing presentations and bringing in to school Haitian food for sampling.

In 2010, after the Haiti earthquake, her family served 400 children. It’s only one meal a year, Dufort said, but it gives them hope. "Hope still exists," said Dufort in her essay, dotted with French terms. "I know that, one day, Haiti will change for the better."

Garcia, in her essay, gave examples of perspective, looking at things from the point of view of others. It has saved friendships, and given her new-found understanding, she said.

Ghanei, an Iranian-American, spoke on the impact of words. After 9/11, she was judged by peers and strangers, called a "terrorist." She talked about a teacher, still working at her high school, who referred to another Middle Eastern student as a terrorist. Words, Ghanei said, do have impact. She said she refuses to allow herself to be ruled by the cruelty of others, and, looking beyond their "caustic" words inspires her optimism.

Dufort, who will read her essay to club members at a future meeting, goes on to the next level of competition.

Optimists International calls itself "friend of youth." Its signature campaign is raising funds on behalf of children with cancer. Each chapter creates its own fundraising programs and designates its own recipient(s). During the year, the Optimists of Greater Vienna also hold an oratorical contest and a communication contest for children who are deaf or hard-of-hearing. The Vienna club sponsors the Vienna Farmers’ Market, and maintains the red caboose on Dominion Road.

To learn more about the Optimist Club of Greater Vienna, go to http://www.optimistclubofgreatervienna.org/