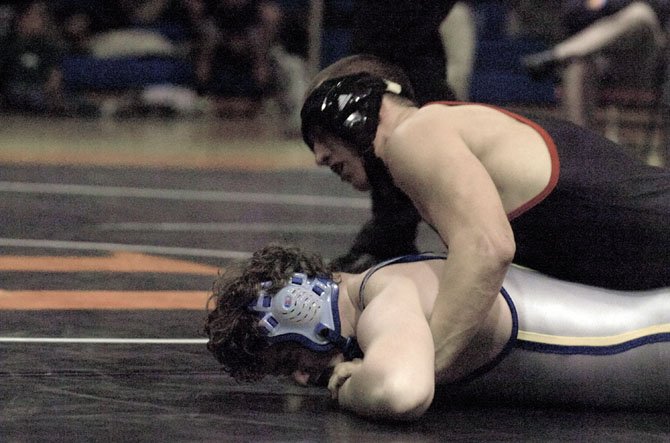 Dooley, the top seed from the Liberty District, won all four of his region tournament matches to earn the title. He opened with a pin win over Woodson’s Frank Boa-Durgammah, then defeated Chantilly’s Joey Rivetti with another first round pin in a quarterfinals round matchup. In the semifinals, Dooley edged Robinson’s Austin Riggs, 5-3, in overtime to qualify for the finals. There, in the championship match, Dooley once again saw his match go into overtime. And once again, he was victorious, 3-1, over Westfield’s Brett Campbell to earn the region championship.

Madison’s Hoy, meanwhile, entered regionals as the No. 2-seed from the Liberty District. He opened up his region tournament with a third round pin victory over Mount Vernon’s Xavier Craig, then defeated South County’s Keegan Sullivan, 7-1, in a quarterfinals match. That put Hoy in the semifinals where he defeated Westfield’s Austin Knies by major decision, 13-4, to advance to the title round. There, he won a close 3-2 decision over Robinson’s Daniel Mika.

Cusack, the top seed from the Liberty District, won all four of his region matches to earn the crown – pin victories over Annandale’s Anour Sakta and Chantilly’s Ali Nadri over the first two rounds; an 11-1 major decision win over T.C. Williams’ Ibrahim Bunduka in the semifinals; and an 8-0 major decision triumph in the finals over Westfield’s David Aiello.

Crawford, at heavyweight, won his first match at regionals with a pin win over Stuart High’s Alan Lara. He then defeated Oakton’s Spencer Conley, 3-1, in a quarterfinals match. Then, in the semifinals, Crawford, the top seed from the Liberty, edged Yorktown’s Charlie Whelden, 2-1. That put Crawford into the championship match where he lost by pin to Robinson’s Jake Pinkston.

Murga, the top seed from the Concorde District, reached the region finals at 195 with wins over South County’s Aziz Osmani, South Lakes’ Michael Shoebottom, and Marshall’s Sam White in the semifinals. In the title match, Murga lost by technical fall to Jefferson’s Patrick O’Connor.

Gerow, at 126, earned his third place finish with a consolation finals win over Langley’s Leland Jenkins, 9-4.

AT THE LIBERTY DISTRICT championships at Langley High School two weeks ago, the host Saxons captured the team title with 216.50 points, ahead of second place Marshall (216.50). South Lakes (144), Fairfax (138.50), and Madison (134.50), finished third through fifth, respectively. The sixth through eighth place finishers were Jefferson, Stone Bridge, and McLean.