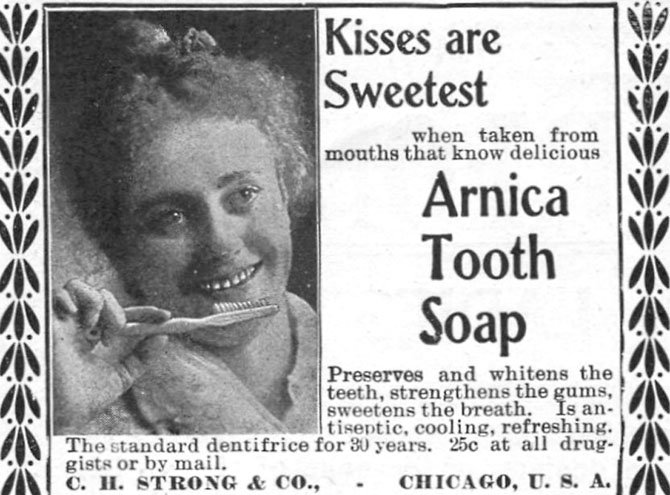 An 1899 advertisement for tooth soap, one of thousands in Reston resident Jay Paull’s collection.

Reston — Jay Paull’s love of advertisements is practically genetic. His great-grandfather was an early publisher in West Virginia, and his daughter (Paull’s grandmother) started to collect those early publications. They’ve been passed down from generation to generation, with each one adding more advertisements to the collection.

As a child, Paull, who lives in Reston, would collect ads, even writing companies to ask them for prints. Now 42, Paull has a collection of almost 10,000 ads from around the mid 1800s to 1923 that he’s decided to share with the world.

Last September he launched a website featuring scanned advertisements, and he already has more than 2,900 on the site.

A 1906 advertisement for Virginia’s vacation spots, one of thousands of vintage ads in Reston resident Jay Paull’s collection.

"I’ve always loved the collection, but I never really did anything with them," he said. "I thought about a website because most sites with these types of ads are trying to sell them, and they’re not large collections and once they’re sold, they’re gone. I wanted my site to be more of a representation of how people lived through advertising back then."

Paull, who designed the site and hired a programmer, says the ads on his site are just for people to look at, he’s not interested in selling, just sharing his collection.

"I’ve gotten attention from all around the world, whether a Spanish daily newspaper of bloggers in the Netherlands, it’s just fascinating to think of people all over the world who are interested in old American print ads," he said.

Paull’s collection is divided into 36 different categories, such as communication, food, home products, tableware and more. He says one of the more interesting categories is the carriage and automobile one.

"In the mid-1800s you saw a lot of carriage ads, but by 1910 the automobile was coming into its own, and that’s reflected in the ads," he said. "You can see the evolution of the product, from it’s early beginnings to claims made about a certain automobile’s superior power or structure."

ONE AD FROM 1900 features the Automobile Company of America’s Gasmobile, "the finest gasoline touring carriage in America," available then for $1,600.

Another trend Paull noticed was in the clothing ads.

"In the mid to late 1800s, the ads were for tailors, or for places to get clothes tailor-made," he said. "But around 1910-1915, the ads started coming out for ready to wear, pre-made clothing, and it’s fascinating to watch the definite progression."

An 1834 ad for Arnett Tailoring speaks to the company’s "arrangement to receive the latest fashions from the Eastern cities."

Paull says he also enjoys many of the medicinal advertisements, which are clearly outdated in their claims.

"There are ads that make a lot of outlandish claims, which I think probably led to more regulation of the industry," he said. "There is one for a pipe company that describes how the pipe itself siphons off the nicotine from the tobacco before it reaches the smoker. I don’t think that would even make it out of the room today. There’s also a lot of remedies, like beef juice, which the ad claims will cure almost any ailment under the sun." 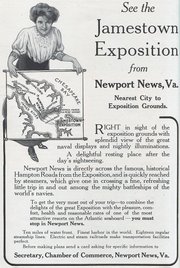 This ad from the Jamestown Exposition in 1907 is one of thousands in Reston resident Jay Paull’s collection, which are featured on his website.

While many products in Paull’s collection don’t exist any more, equally interesting are the ones that still permeate our advertising culture. Kellogg’s, Coca Cola, American Express Traveler’s Cheques and Quaker Oats are all present in his collection.

Many of Paull’s advertisements, especially the early ones, are hand drawn by famous artists such as Joseph Leyendecker and Edward Penfield. Leyendecker painted more than 400 magazine covers between 1896 and 1950, including 322 for the Saturday Evening Post. Penfield is considered the father of the American poster and a major figure in the history of graphic design.

Paull says the process of scanning in several ads at a time over many months has taught him many nuances of advertisements.

"A lot of the older ads would include the name and logo of the ad agency right in the advertisement, which would not happen today," he said. "It’s almost like these agencies were creating a brand of their own."

WITH ALMOST 3,000 ADS on his site, Paull says he has plenty more in his collection to go over the coming years. Since the site isn’t his full-time job, he scans a few ads at a time when he has time, often researching the company or product.

"I’d like to keep expanding as long as I possibly can, and at the rate I’m going, I have years worth of ads," he said. "I’m hesitant to take any other ads than what I have in my collection, because I have mine in hard copy and can verify when and where it came from, I think anything else would just dilute the quality of the site."