Scott Brabrand, the former principal of Fairfax High School, did not need the official proclamation declaring it "Scott Brabrand Day."

The group of citizens, parents, educators and civic leaders who gathered at Blenheim House on Feb. 26, made it clear that Sunday was Brabrand’s day with a series of touching stories, amusing anecdotes and congratulations to the longtime Fairfax educator. 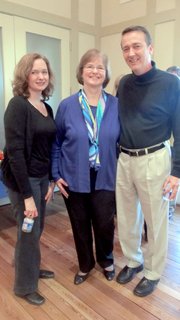 IN 2005, Brabrand was named principal of Fairfax High School; in 2009, he was named assistant superintendent of Cluster IV for Fairfax County Public Schools (FCPS).

"Scott’s trademark mantra at Fairfax High School was ‘The main thing is to keep the main thing the main thing,’" said Fairfax City Councilman David Meyer, who organized the reception. Meyer told the crowd that his son came home from school one day wearing a t-shirt with Brabrand’s picture on it, and his trademark quote on the back.

"We have this shirt to give you, and have ordered a special display case for you to keep it in," he told Brabrand, to laughter and applause.

Meyer also told the story of seeing hundreds of Fairfax High School students cheering for Brabrand when he was announced at the Science Fair his second year as principal.

"The spontaneous cheering amazed me," Meyer said. "When I was in high school, cheering for your principal was not something adolescents did. It was at that moment I understood that there was a special bond between Scott and his students." 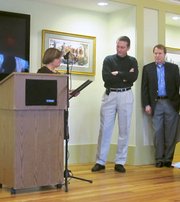 Brabrand said he was humbled by the accolades, and grateful to his wife, Debbie, and their twin boys, Bennett and William for being supportive. "I really believe strongly in public education, that we can produce the best and brightest, and I will take what I learned here in the city and county with me," Brabrand said.

Brabrand’s rise through the ranks of the city and county schools was swift, and he was known as a creative leader. As FHS principal, Brabrand was responsible for increasing enrollment in Advanced Placement (AP) classes by 54 percent over a three-year period and increasing enrollment in pre-AP honors courses by 42 percent. Under his leadership, according to FCPS, the achievement gap for Hispanic students on English and math Standards of Learning (SOL) tests was eliminated at FHS. For African-American students, economically disadvantaged students, and students with disabilities, the achievement gap shrunk to 11 percent. Brabrand also championed a "Rewards and Remediation" program that decreased failing grades in SOL classes by 57 percent in two years.

Brabrand also designed and implemented a leadership curriculum for 16 aspiring principals, for whom he helped develop individual development plans and served as a mentor.

PRIOR TO BECOMING PRINCIPAL at Fairfax, Brabrand served as an associate principal at Lake Braddock Secondary School; an assistant principal and social studies teacher at Herndon High School; and as administrator of the Early Start and Jump Start summer programs.

FCPS Superintendent Jack D. Dale could not attend the event, but sent a letter saying that Brabrand was not only an "exceptional principal but a phenomenal cluster assistant superintendent."

"He has shown unequaled commitment to the creation of a better future for the children of our schools, and he will be greatly missed," Miller said.