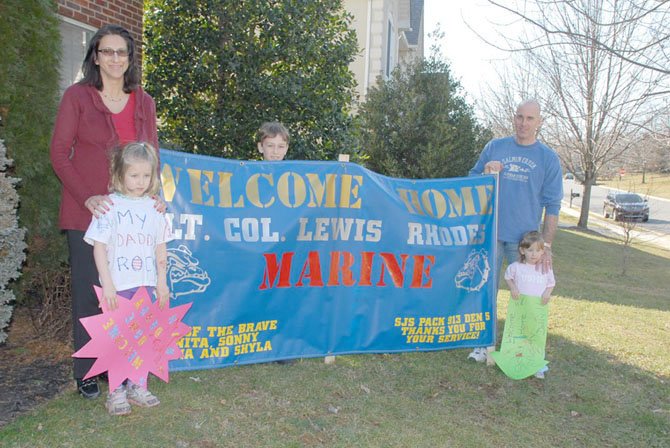 Vinita and Lewis Rhodes with their children, Sabina (on left), Sonny, and Shyla at their home in reston. Cub Scout Pack 913 ordered the blue banner that adorned the family lawn when Lewis returned home. Other neighbors and friends also made lawn signs, welcoming Lewis home. Photo by Amiee Freeman.

The Rhodes family of Reston received the best Valentine’s gift. Lt. Col. Lewis Rhodes returned home safely from seven months’ deployment in Afghanistan on Monday, Feb. 13. Vinita Rhodes said that the support she received from her friends and neighbors and the strength she gained from her children helped her and her family get through her husband’s deployment.

Lewis Rhodes is a Marine Corps Reservist in the 4th Civil Affairs Group based at Anacostia Naval Base in Washington, D.C. His unit deployed to Forward Operating Base Delaram in Helmand Province in August. As is the case with Marines, Rhodes had the choice of a one-year deployment with two weeks of home leave or a deployment of seven months. Wanting to complete his deployment quickly and return to his family without the disruption of home leave, Rhodes chose the 7-month deployment. As a result, when his family, Vinita and their three children, Sonny, 7, Sabina, 4 and Shyla, 2 1/2, said good-bye to him Aug. 1, they knew they would not see him until February. 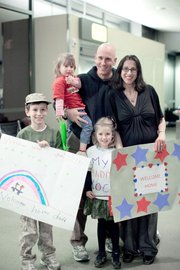 Photography by Marirosa for Operation Reunited

Vinita Rhodes with children, Sonny, 7, Sabina, 4, (standing) and Shyla, 2 1/2, were able to meet their husband and father, Lt. Col. Lewis Rhodes, of Reston, at the gate on Feb. 13. Rhodes was returning home from a 7-month deployment to Afghanistan.

This was Lewis’ fifth deployment, but his first with children. Prior to joining the Reserves, Rhodes, a 1994 U.S. Naval Academy graduate, spent seven years in active duty. He left active duty in September 2001. While working toward his law degree at Georgetown Law, he was deployed to Iraq in 2003 with the 1st Marine Division.

Prior to this deployment, Lewis explained to his children what he was doing.

"Sonny was old enough to understand. I told him I was going to help people and to make our country safe. Sabina just knew I was going. Shyla was barely talking when I left," said Lewis.

Despite this talk, the children had difficulties with their father’s absence. They had trouble sleeping at night and had night terrors. As Lewis left in August, the children still had a month of summer vacation, then the start of school and all the ensuing holidays and events that occur between August and February. Vinita suddenly became a single mom to three busy, but somewhat anxious children. In addition, the day his unit left Ft. Bragg for Afghanistan, Vinita found out that she was pregnant.

"Being pregnant was the hardest thing," said Vinita. "Three kids I can handle; pregnancy was a challenge. I’m an educational psychologist, I thought I knew how kids would react to this, but his being gone was very hard for them. Not sleeping well at night and night terrors, but they are very resilient. Sonny was remarkable. During the first trimester, he really stepped up and helped out around the house and with his sisters. It’s amazing to see them handle it. I gained all my strength from my children. We actually thrived. We can do this. We also had a lot of support."

Lewis said that having to deploy as a reservist is harder than deploying as an active duty service member.

"No one will take care of a Marine family like another Marine family. The closest family from my unit lives in Pennsylvania. It is much harder for a reservist to leave his or her family, not knowing if anyone is going to help take care of them," said Lewis. "That being said, our neighbors and friends really came through for us and helped Vinita and the kids so much."

Neighbors and friends from school and church came forward to set up play dates, shuttle the children to their various after school activities, to provide meals and to babysit. Janice Spillan, a mother to a friend of Sonny, offered to drive Sonny to Cub Scouts.

"I knew Cub Scouts was something Vinita probably would not be able to do. With Cub Scouts, you can’t go back and get a badge that you missed. There would be a hole there, and it would be a reminder of the time his dad was gone. I wanted to lessen the blow of his dad being gone and also in our way thank his dad for his service. It was what I could do to thank Lewis and help Vinita, and it was an honor and pleasure," said Spillan. 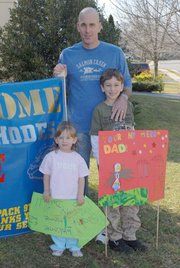 Lewis Rhodes with two of his three children, Sonny and Shyla.

"Vinita is so hilarious," said Alison Malzhan, another friend’s mother. "All we did was have Sonny over a few times and bring her some meals. It wasn’t very much. It was her family that was helping ours. It was her husband who was gone for seven months in Afghanistan, keeping our country safe. It should be us thanking them."

Vinita also received support from Shyla’s preschool teacher, Ginger O’Rourke, who is a military wife herself. Knowing how young children experience anxiety during a parent’s deployment, O’Rourke stayed attuned to any signs of stress in Shyla and made sure to inform Vinita of anything unusual observed during class time. She also shared with Vinita some strategies to help the children cope with Lewis’ deployment.

"I shared many at-home deployment strategies with Vinita, like making paper chains to countdown the days, books about Daddy with pictures of fun things they've done together, calendars, Daddy pillows made from t-shirts," said O’Rourke. "Luckily for Vinita, there are now things like Skype and email, not to mention more opportunities to call. When my husband was deployed, those things weren't around. I do know that having a husband deployed in the Washington, D.C. area is exceptionally challenging when it comes to support or having people around who know what you are going through. The area is so large, and you don't have the support of a post or base. Your neighbor isn't military, your friends aren't military. It's very hard. I think Vinita has reached out in such a positive way and found the support she needed exceptionally well," O’Rourke said.

SINCE RETURNING HOME, Lewis is trying to return to his routines while at the same time share some of his experiences by visiting his children’s schools. He visited Sabina’s preschool and moved his picture from Afghanistan back to Virginia. He visited Sonny’s class at Fox Mill and talked about his experiences.

Lewis said this deployment is not something he would want to do again, but is proud of the transformation he has seen in his children and the help they received from the community.

"The kids’ transformation has been tremendous, and the support we received from the community was exceptional. There’s nothing like a deployment to know who your friends are," said Lewis.

"I am truly humbled by the support we received from our community. I can’t thank them enough," said Vinita.