The Horrors of Heroin Use
Votes

The Horrors of Heroin Use

Centreville — It’s not easy to stand in public and bear one’s soul about life’s most tragic moments, but that’s what Tayler Gibson, Greg Lannes and Greg Richter did recently. Addressing the Sully District Police Station’s Citizens Advisory Committee (CAC), they described in detail how heroin had affected their lives.

“The purpose is to open eyes and get people to become realistic and aware of what happens in their neighborhoods, parks and schools,” said Sgt. Bill Fulton, SRO supervisor for the Fairfax County police. “It’s our problem, so we’re bringing the reality to you.” 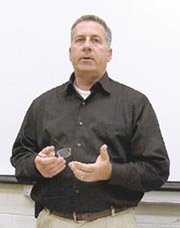 Therefore, he told the local residents attending the CAC meeting, “If [drug use and deals] happen in your neighborhood, you’ll recognize it and will be able to [help stop it]. The police department is only successful if people in the community trust us enough to tell us things.”

The worst moment in the lives of Greg and Donna Lannes of Centreville’s Country Club Manor community came in the wee hours of March 5, 2008. Police pounded on the door of their home at the same time their daughter Alicia’s boyfriend, Skylar Schnippel, called her parents to ask them to check on her.

He’d given her heroin, the night before; yet even after he realized she’d overdosed, he let several hours pass before telling anyone. “We found her lifeless body on the floor,” said her father.

Alicia was 19, and her death was the catalyst for a seven-month investigation into a Centreville heroin ring. She was one of four people — three of whom were Centreville residents — who died of heroin overdoses, and local and federal authorities worked together to take down those responsible. 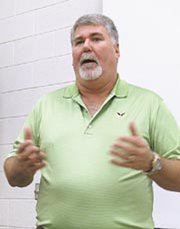 Eventually, 16 people were arrested and convicted of charges including conspiracy and distribution of heroin. In 2009 they received a total of 135 years in federal prison, with sentences ranging from 30 days incarceration to 27 years. Schnippel was sentenced to 20 years for giving Alicia the heroin that claimed her life.

One of those involved in the ring was Gibson, whose boyfriend, J.R. Quick, was described by prosecutors as “one of Centreville’s most prolific heroin dealers.” In March 2009, he was sentenced in federal court to 19 years in prison.

When Quick was jailed in April 2008, Gibson took over his customer base and bought heroin in Baltimore for resale in Centreville. She continued selling it until August 2008 and was later convicted of conspiracy to distribute heroin.

However, the U.S. attorneys noted her “substantial assistance” in the investigation and prosecution of the co-defendants and said she spoke with authorities “well before anyone was charged federally.” She also received extensive addiction treatment and got a job.

At Gibson’s June 2009 sentencing, U.S. District Court Judge Leonie Brinkema called her “a 20-year-old defendant who suffered a personal tragedy as a young adolescent, but turned her life around.” She then sentenced Gibson to 30 days, to be served on weekends. 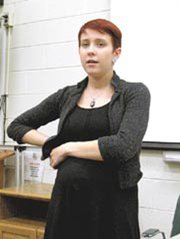 Similarly, prosecutors said Anna Richter kept the Centreville heroin conspiracy flourishing by introducing the young, college-age dealers to a new heroin source in Baltimore when their local one dried up. However, the attorneys said Richter also helped with the investigation and prosecution of other members of the ring. They said she provided critical information about the conspiracy’s 2005-2006 origins.

At Richter’s sentencing, also in June 2009, Brinkema said she’d “made extraordinary strides in kicking her addiction. She’s been working full-time for six months, and her supervisor wrote a glowing letter about her.” The judge then gave Richter 60 days community confinement with work release.

“When I was 13, my mom had an aneurism and went into a coma, and we were told she wouldn’t live,” said Gibson. “She did, but she needed lots of rehab, and my dad trusted my brothers and I to take care of ourselves.”

But, said Gibson, “In my junior year of high school, I worked in a restaurant with older kids and got involved smoking weed at age 17. I hooked up with old friends and started experimenting with psychedelics and prescription drugs.”

She said that, a month after she started taking heroin, she and Quick bought it in Washington, D.C., and were then arrested and charged in Fairfax County with possession with intent to distribute.

“I convinced my mom it wasn’t mine,” said Gibson. “The charges got dropped and I suffered no consequences. We continued to use heroin; my boyfriend got arrested several times, as did his friends.”

Even after Alicia — a good friend of hers from grade school — overdosed and died, Gibson still did heroin. Her boyfriend had given it to her for free; but after his last arrest, she had to buy it.

“I quit going to work because it got in the way of my doing drugs, and I dropped out of VCU,” said Gibson. “I stole my mom’s car, went to D.C. to buy heroin and crashed the car on the way back. I planned to admit it to my parents and go to rehab; then the police came to my house to search it for drugs.”

Next, she said, “I went to detox and then to in-patient treatment in Annandale. But I was still using, so I got kicked out. Then I learned I was being charged federally — and that 11 of my friends would also be charged with conspiracy to distribute heroin.”

“I went to federal court and had to go to drug treatment, but I continued to drink because it didn’t show up on my drug tests,” said Gibson. “The judge was lenient with me and sentenced me to 30 days in jail. She also placed me on five years probation — I’m still on probation. But I quit drinking and have been clean for just over two years now.”

Greg Lannes told the audience his daughter’s problems stemmed from a rape at age 14 that she didn’t tell anyone about for years. So when Alicia became involved with heroin, he said, she was “self-medicating” as a way of dealing with the horror of what had happened to her.

He then gave several statistics taken from a survey about drug and alcohol use among middle- and high-school students in Fairfax County, as well as incidents of bullying and rape. “The survey also showed many kids felt severely depressed,” said Lannes. “They’re dealing with many issues — and we, as a community, need to find out what they are.”

Now for the first time, he said, “Prescription drugs have taken over as the first-time drug, over alcohol and marijuana. Kids get them from your medicine cabinets, from friends and at ‘pharm’ parties where they’re all mixed together.”

So if parents suspect particular teens are using drugs, advised Lannes, they should “tell those kids’ parents so they can get some help for them. My daughter wanted to live and go into pre-med [studies]. And although she died, her death has saved other lives.”

Virginia Run’s Greg Richter said he was relieved when his daughter Anna was sentenced to only 60 days work release. “That’s not what we expected,” he said. “We thought she’d go to prison.”

“So I’m here to tell you, trust your instincts if you think something’s wrong,” he continued. “If you see the signs [of substance abuse], act on it — and don’t be afraid what your neighbors think. My daughter said it started for her with alcohol; her inhibitions were down and she did stupid things.”

Richter’s worst moment came when he found Anna in a hospital in Baltimore at 1 a.m. “She’d overdosed at an intersection in Baltimore while driving,” he said. “We got her home and, at 6 a.m., she was sneaking out to go buy drugs again. A neighbor said she needed treatment. I said I couldn’t afford it, and he said, ‘Can you afford a funeral?’”

So Anna was sent to a heroin-treatment center in Boca Raton, Fla., and it worked. “She was in bad shape and it was a long road,” said Richter. “But at the end of six months, we got our daughter back.”

At her sentencing, he said, “The judge said Anna had rehabilitated herself and she didn’t want to undo it [by incarcerating her]. Anna’s still in Florida and, 3 and a half years later, she’s still sober.”