Dr. Allan R. Gall has published his first book, "Of Mouse and Magic," for parents to read to their children.

By By Erik Heaney 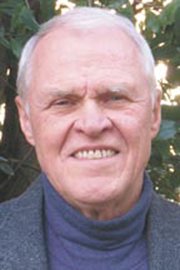 Arlington — "I went to a one room school house, which meant that there were eight grades, all in one room and with one teacher," said Gall. "For most of the time, it was very boring. But we had a library, and I feel lucky in that sense, because it meant that I went to the library. And when I say library, I mean that there was a bookshelf at the front of the room."

By the eighth grade, Gall had read all of the books at his school’s modest library. "That's really when I began to get interested in books and interested in literature," he said. His interest in books led Gall to continue a life of learning, eventually earning himself a Ph.D. in Middle East studies from the University of Michigan.

Many of the scenes in his book were inspired by events in Gall’s life. For example, there is a scene where an outdoor mouse marries a house mouse, which causes a cultural clash between the two cultures of mice. But the controversy is settled when the mother accepts her daughter-in-law without hesitancy, and so everyone else follows her lead.

Gall took this scene directly from a childhood memory when his uncle had married a Catholic. "In this very conservative community where I grew up, the community was divided between the Protestants and the Catholics," Gall said, "and whenever they crossed paths, there was friction."

"And I remember very clearly as a young child overhearing this conversation with my mother and her sisters," Gall recounted the family feud, "and someone suggested that maybe we shouldn't invite her over for the holidays, but my mother got really outraged at that idea. And so she set the example: she said I will have the next family event, and they will be there."

But there is also a lot from Gall’s career experience, particularly as a refugee policy advisor. At one point, Manny’s family is forced to flee from their home. "I refer to them as refugees, and I don't think many other writers would have done so," said Gall, "but I've spent 20 years in the federal refugee program, and I know personally many people for whom that's the story of their lives."

Gall explores many topics in his book: survival, family, companionship, cross-cultural interactions. But some of the topics are little more serious, like being a refugee and dealing with death. "Children aren't afraid of death," Gall said, "they don't see that as a subject that is frightening."

His book was written as a series of bedside tales for parents to read aloud to their children, not so much for children to read individually to themselves. So as parents come across some of the weighty topics, Gall intends for them to discuss with their children in a manner that the parents see fit.

Gall’s vision of parents reading his book aloud to their children comes from the fact that the story itself was the offspring of a yarn he was spinning for his grandchildren one afternoon. Gall had told stories to his children, and continued the tradition with his grandchildren. With this particular story, he had begun to tell it in the car ride to the airport, but did not have the time to finish telling it. So he promised to write the ending for his grandchildren.

"I had thought that I'd spend a couple of weekends, it would be about 30-40 pages, and I'd send it to them," remembered Gall. "Well, almost 600 pages later, I had a book." Over the past 10 years, the author slowly edited it down to the current 269 pages, and had eventually had it published in 2011.

When asked where he found the time to write his book, Gall said, "I don't suffer from writer's block and I've never had. As soon as I get down to write, I get energy."

"Of Mice and Magic" is available for sale at Amazon.com and Barnesandnoble.com. It is also in circulation at the Arlington and Falls Church public libraries. Gall will also be a Barnes and Noble feature writer at the Fairfax book fair for children on March 1.