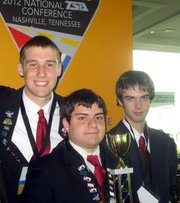 Systems Control Technology is a rigorous event. Competitors have 15 minutes to read and come up with a solution to a problem. Then they have two hours and thirty minutes to build and program a prototype that solves the solution, followed by an interview with the judges. This year's problem at the National level was to design a distribution center that sorts packages based on size and the package's size determines which way it will go through the system. It must be able to detect the presence of a package and then be able to sort it. The system has to be able to detect the package at the loading dock and make a light flash ever five seconds to signal to truck drivers that there is a package ready for them to be picked up. The system must have an emergency turn off switch to shut down the whole system during night hours or for emergency. The team came up with a brilliant idea of using mechanical pushing arms to sort the packages, which will then fall down a chute to their respective docking location.