Guns from the South
Votes

Guns from the South 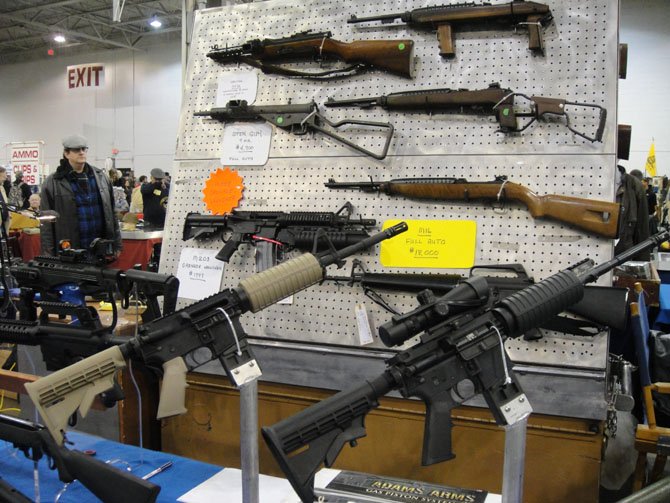 Alexandria — On July 1, the 19-year restriction on handgun purchases in Virginia became null and void. The measure was signed by Gov. Bob McDonnell Feb 28, and effectively allows an unlimited number of handgun purchases to individuals in the Commonwealth of Virginia.

Small businesses that support the change maintain a rise in handgun sales will lead to increases in state revenue, and that the restriction is fundamentally against the second amendment of the U.S. Constitution. Opponents of the measure argue that lifting the restriction will facilitate arms trafficking and further the image of Virginia as a rogue supplier of firearms.

The one-handgun-per-month restriction was a signature effort of the Douglas Wilder administration, and was aimed squarely at crime organizations from New York. Such organizations filtered south to Virginia for bulk purchases of handguns from local retailers. By purchasing handguns in Virginia, firearms traffickers circumvented stringent controls in New York.

According to Don Beyer, lieutenant governor of Virginia under the Wilder administration when the restriction was established in 1993, the limit on handgun purchases was seen as a practical and bipartisan solution to gun trafficking.

“We wanted to break the link between gun running in a way that the second amendment would not be broken,” said Beyer in a telephone interview. “We had a lot of bipartisan support, limiting gun purchases to one per month is not the same as taking all guns away. People thought this was a common sense approach, criminals were not buying Virginia guns in bulk and to that extent it was a very good thing.”

The restriction had an immediate impact on Virginia guns found at crime scenes out of state. According to the Journal of the American Medical Association and ATF records of traced firearms used in crimes, 41 percent of crime scene guns found in New York City in 1991 originated in Virginia. Two years after the restriction was put in place Virginia guns only accounted for 15 percent of total guns used in crime there.

The net effect of the restriction did not hold up over time, however, and by 2006 Virginia was once again a top supplier of guns used in out of state crime. Colin Goddard, a survivor of the 2007 Virginia Tech mass shooting and spokesperson for the Brady Campaign to Prevent Gun Violence, notes that guns trafficked from Virginia are caused by ever increasing exceptions to the one-handgun-per-month restriction.

“Lobby groups like the NRA started taking away pieces of the law until they could claim it was redundant. The law did not apply to private sales, collectors, and not if you had a concealed handgun permit,” said Goddard in a telephone interview. “Basically everyone was exempted except gun traffickers.”

The consequences of firearms trafficking are deadly. In December of 2011, NYPD Officer Peter Figoski was shot and killed by a Virginia handgun. Following the high-profile murder, New York City Mayor Michael Bloomberg and Boston Mayor Tom Menino brought the issue of illegal guns to the national stage during a 30-second advertisement for Super bowl XLVI. Although Bloomberg did not call out Virginia by name during the Super Bowl slot, in an emailed statement to the Connection Newspapers the mayor made his sentiments clear.

“Virginia is the number one out-of-state source of crime guns in New York, and one of the top suppliers nationally,” said Bloomberg. “If they care about innocent people and police officers being shot, they should be strengthening laws — as we have done in New York — to keep guns away from criminals, not weakening them.”

Proponents of lifting the one-handgun-per-month restriction are quick to point out second amendment concerns. “We had a man come in looking to buy a handgun for his daughter, wife and himself because he felt his family was threatened,” said Brian Reed, a gun dealer with the Damascus Gun Shop in Damascus, Va.. “He couldn’t, because of the restriction, and he had to wait months to buy them.”

Virginia guns have been selling at record highs even with the restriction in place. According to the Virginia State Police, between 2010 and 2011 there were 321,166 firearm background checks from licensed dealers in Virginia, the largest number of checks ever. Conservative estimates put these sales into the millions of dollars.

Annette Eliot, president of Showmasters, a family-owned gun show company, notes that many of the Virginia gun dealerships are small businesses. Although the one-handgun-per-month restriction has limited potential sales, lengthy wait times for background checks are a principal concern for firearm dealers.

“The average customer is delayed by four hours because of background checks, it’s expensive because people walk away from sales,” said Eliot. “These are small businessmen, last year dealers lost 12 percent in sales, that’s a hit.”

Background checks do not apply to private sales, however, and law enforcement officials do not know how many firearms are sold under such circumstances. “That is not something the Virginia Firearms Transaction Program is capable of tracking or capturing, nor is the FTP mandated to do so by state law,” said Corinne Geller, a spokesperson for the Virginia State Police.

Proponents of stricter firearms controls point to the “gun show loophole” as a source of illegal firearms transactions. Gun shows make space available for private citizens to sell weapons from personal collections, without conducting background checks. The one handgun per month restriction does not apply to such individuals. Applicability of the restriction to private sales, however, was never the intent of the original legislation.

“The perception was that people don’t go to gun shows to buy 50 at a time,” said Beyer. “The way the market worked at the time had to do with the radical operation of gun stores who could deal in volume.”

“Criminals don’t buy guns from private individuals at gun shows, the truth is that 98 percent of guns used in crime come from us,” said Reed. “Criminals will get guns, the solution is tougher laws for criminals.”

Although Virginia has laws in place that guard against falsifying documents when purchasing handguns, it is not required to report a lost or stolen firearm. According to the Bureau of Alcohol, Tobacco, Firearms and Explosives, such leniency creates an atmosphere ripe for gun trafficking via straw purchases.

In exchange for as little as $10, or an equivalent in drugs, individuals with clean records will purchase a handgun and give the weapon to a ringleader for transportation.

“A straw purchaser is someone saying this gun is for me, then meets a person a few blocks away and gives them the gun,” said Mike Campbell, a spokesperson with the ATF, in a telephone interview. “Most people buy a gun and choose to keep it for a while, newly purchased guns used in crime scenes are more likely to have been trafficked.”

Law enforcement agencies track crime scene guns by following the supply chain, from gun manufacture to wholesaler, dealer and the individual who purchased the gun. If the owner has sold the firearm without keeping a record of the transaction, lost the gun or had it stolen, the trail goes cold.

Law enforcement officers are not involved in the political debate regarding the one handgun per month restriction. “Virginia is an island of loose gun regulations surrounded by states with more stringent controls on firearms,” said Campbell. “It’s not our job to advise states what they can and can not do with their laws. The people of Virginia are the ones who elected their officials.”

Legislation going into effect this week in Virginia includes multiple bills that ease any restrictions on guns. The new laws: