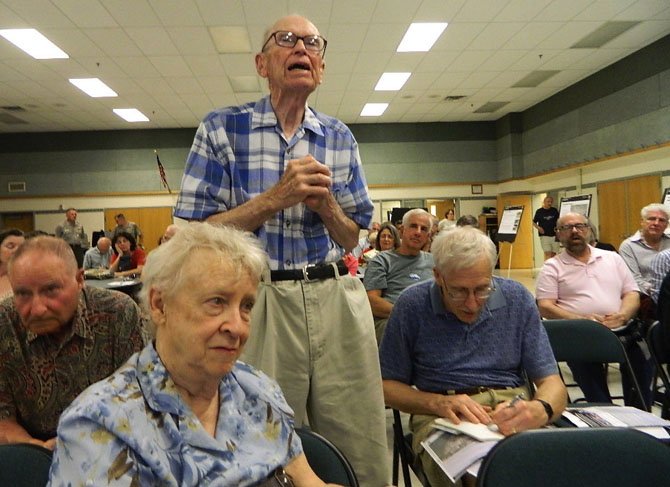 Instead, NPS spokesmen Ben Hellwig and Thomas Sheffer repeatedly directed the group of about 100 residents to break up and individually question staff members, then submit comments in writing. The public would not be able to read these comments until a final report is issued in the fall.

“I think they may have been reacting to what happened at the meeting in September, which I understand got somewhat heated,” said resident Mary Ann Sutherland in an e-mail to the Gazette. “But the people who care about what happens to the park are all from different neighborhoods; we have no practical way of communicating. It is very important that we be able to hear each other’s comments and concerns.”

“It’s always a mistake in a public forum not to have Q&A,” said Joe Gililland, president of the Potomac Valley-River Bend Civic Association, also in an e-mail. “If the public doesn’t have a chance to be heard it causes frustration and suspicion.”

After a five-minute uproar of pleas and protests punctuated by park service rebuffs, acting NPS superintendent John James stepped in to allow a public question and answer period.

Although the park service’s new alternatives no longer call for demolishing pavilions — a proposal which raised a storm of protest last September that caused the park service to start over in its planning — many residents now raised objections to the current NPS Alternative Concepts 2, 3 and 4 which call for reopening the outer loop road. This closely borders homes on Charles Augustine Drive.

“The Potomac Valley-River Bend Civic Association has concerns about the reopening of the southern loop road that was closed 30-plus years ago,” said Gililland. “It was closed due to documented problems with noise and crime. Our properties back right up to the park and that leaves us vulnerable. The closed loop is now a favorite spot for bikers, walkers and those with baby strollers because there is no traffic–let’s keep it that way.”

Said Sutherland, “This would bring all park traffic within a few yards of neighborhood houses and eliminate the only paved, quiet area available for walking, strollers, wheelchairs, etc.”

Sutherland and others also raised the concern that the park will be turned into a magnet for tourists, bringing crowds, tour buses and possibly an entry fee.

Tourists may or may not have plenty to see, depending on NPS plans not yet developed. The primary reason for re-aligning the park, said park representatives, is to highlight its WWII role as a secret interrogation center for high-level Nazi prisoners. The camp was known only as “P.O. Box 1142.”

Two large “Historic Land Use Restoration Areas” in the southern half of the park would be set aside for study and possible display, as yet unspecified though possibly a re-creation of the internment camp might be built. These areas where interrogation Compounds A and B are believed to have stood are currently partly paved by the roadway. These sections of roadway would be removed and replaced by a paved trail bordering their northern edge.

The park service has done oral histories of about 70 American servicemen who were interrogators there, according to NPS historian Brandon Bies. The POW compounds were bulldozed after the war, leaving no trace.

Said Sutherland, “What troubles me is that the plans would sacrifice the recreational uses of the park to preserve historical areas where there is essentially nothing to see. I don’t believe the Park Service has considered all the alternatives — for example, they could simply build an informational kiosk with photos and put up signs at various points of interest. They could do this without changing the fundamental nature of the park.”

At present there is no funding available to start revamping the park, and Alternative Concept 1 calls for no action and leaving the park as it is.

However, Alternative Concepts 2, 3 and 4, in addition to reopening the back loop road, call for a “Visitor Contact Station” at either Picnic Areas A, B or C, an interpretive trail and removing a minimal amount of vegetation to achieve a view of the Potomac River at either Battery Robinson or Sater, located in the extreme eastern corner of the park.

The deadline for public comment is July 28; the park service is expected to present its findings to the public in the fall.

Comments can be made online and the alternatives studied in their entirety at http://parkplanning.nps.gov/forthunt.

“The park service says they are trying to maintain both the recreational and historical uses of the park. But I am concerned that their plans would turn this people-oriented park into a tourist destination,” said Sutherland.