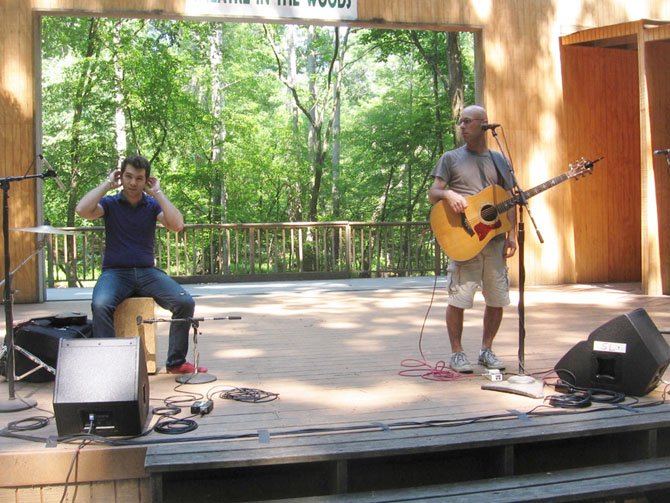 In a significant change in programming, Theatre-in-the-Woods [TITW] now features one performance daily, a schedule that mirrors the diversity and professional caliber of the Filene Center and the Barns of Wolf Trap.

"When we had two shows in the morning, there was too much competing with other activities," said Assistant Director, Education Outreach, Erin Perry. "We’ve enhanced the caliber of the artists. Most have great reputations and are well-known on the national level."

Nestled in woodland behind Filene Center, TITW features local, national and international artists representing all genres of the performing arts. Thirteen new performers launch their TITW shows in 2013. Favorites, such as Vienna’s own Robbie Schaefer and the Culkin School of Traditional Irish Dance, as well as Dino Rock, return.

BUILT IN 1975, TITW has evolved over the years. This season, performances run for one show only daily, a new performance each day. Showtime begins at 10:30 a.m. to give families and daycampers opportunity to explore the meadow and engage in other Wolf Trap-sponsored children’s activities. Perry said the programming frequently aligns itself with park service or White House initiatives, such as "Let’s Move."

Kiddie rock – or "kindie" rock as it is referred to in the industry – is an emerging genre, Perry said. "The music is definitely a lot stronger now, something that appeals to all ages."

"We have a strong educational mission," said Acting Director of Public Relations Graham Binder. "Catherine Shouse wanted to incorporate the arts into children’s lives. The Theatre-in-the-Woods is a large example of the underlying core mission of Wolf Trap.

"We want to get children thinking about the arts at a young age. Fun is a large part, too. The kids come and dance, clap, and jump up and down."

The Theatre-in-the-Woods works with Filene Center and the Barns staff to identify artists for the children’s programming. Perry said they primarily reach out to artists and agents who fit their mission. "We do a lot of research," she said.

An exception to the one-performer-daily programming is Matthias Kuchta, master puppeteer from Germany. He presents "The Wolf and the Seven Little Goats" for one week, Tuesday, July 24 through Saturday, July 28, using life-sized puppets. You’ve got to see the wolf. The German puppet program cost $10 per person aged 2 and over.

Most shows cost $8 per person. Under 2-years-old, no charge.

"A lot of families come because it’s such a value," said Perry. "It’s a bargain way to spend the morning."

"We want kids to come away from the performance taking something away that will help them round out their personalities as they grow up," said Binder.

TICKETS may be purchased online, by phone or at the meadow kiosk before the performance. Some shows do sell out. Performances begin at 10:30 a.m. From parking to show venue is a steep hill that older people or parents pushing strollers need to consider. A park cart driven by rangers is available.