Regulars at the White House
Votes

Regulars at the White House

Local musicians perform for presidents and their guests. 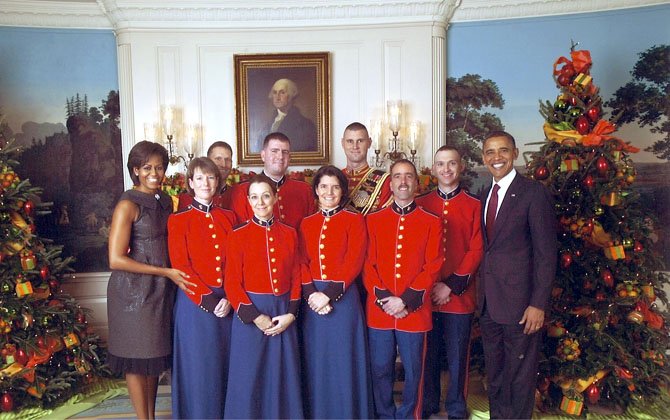 Mount Vernon — About a dozen times a year, Chris McFarlane and Mark Questad, both of Mount Vernon, don their special full dress U.S. Marines uniform, pick up their musical instruments and head to an address in Washington that most will only visit once in a lifetime as a tourist: 1600 Pennsylvania Avenue.

They will go through security, as almost every employee of the president’s does, and move to a holding room supervised by the chief usher of the White House. There they will begin a cycle to which they’re both accustomed: waiting.

“We are invariably always ahead of schedule,” McFarlane said. “We will arrive in the late afternoon (for an evening event) and they always allow double, even triple travel time for us to get there on time.” 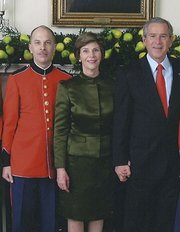 Because McFarlane plays the bassoon and Questad the French horn, they’re consistently part of the welcoming ceremony when a president receives a guest for an official event, such as a state dinner.

Before the guest arrives, the band will set up in the grand foyer, just inside the door from the North Portico. As the guest’s car pulls through the northeast gate, the president and first lady walk out to greet them. After exchanging pleasantries, the band begins to play and there McFarland, Questad and their colleagues will share space with leaders of the free world.

“We’re often in the background as history is being made,” Questad relates and then delivers this descriptor: “we’re like furniture.”

Despite the comparison and their combined 38 years length of service to the band, both admit they’re not too jaded to experience “the wow” moments at work. The most recent was during the May 7, 2007 state dinner for Queen Elizabeth II during the George W. Bush administration.

“Nothing quite compares to being in the same room with her,” McFarlane said. “She was wearing the most spectacular dress. That moment was the wow moment.”

McFarlane attributes his fondness for the royal family based on his heritage: third generation American from Scottish ancestry with about 25 percent English blood.

Questad is the opposite: despite being a certified non-royal watcher, “I was impressed,” he said.

Each has served the last three American presidents, but Questad has one up on McFarlane, having also served President George H.W. Bush, but they both agree the one president that dazzled and excited was Bill Clinton.

“I have to say that the Clintons were the most interesting to work for because they had the biggest star power at events in terms of celebrities — people that you would recognize,” McFarlane said.

“With Clinton there was a level of unpredictability. And with that comes a level of excitement. For example, George W. Bush ran on a very reliable and predictable schedule as far as our expectations when to start and finish a job. The Clintons were the opposite. When things would be scheduled we would be there in enough time but nothing ever started on time, everything went long and went late,” Questad said.

But which president was the best to work for? Well, they were all very nice. “They all were complimentary of our work,” Questad said.

“President Obama has never missed the opportunity to say thank you,” McFarlane said. But both agree that it was Clinton who frequently would recognize a movement from a classical piece and talk about it with some of the band members.

When they’re not performing at the White House, the twosome and their colleagues can be found performing on the steps of the U.S. Capitol, Wolf Trap, and on a tour throughout the U.S.