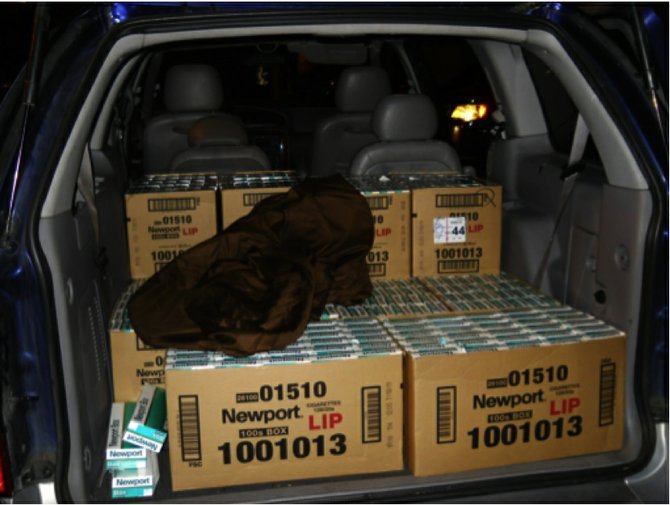 Virginia has long been known as a tobacco-friendly state. Tobacco was one of the first major commercial products for New World European settlers, and the state remains one of the largest producers today. Virginia is also home to some of the cheapest cigarettes in the country.

The disparity between Virginia cigarette taxes and neighboring states to the north provides a financial incentive for what the Bureau of Alcohol, Tobacco, Firearms and Explosives calls cigarette diversion, or more commonly known as cigarette trafficking.

Cigarettes sold in Northern Virginia, with the exception of Arlington, fall under the jurisdiction of the Northern Virginia Cigarette Tax Board. A tax stamp is affixed to the bottom of every pack of cigarettes, with a roll number that NVCTB enforcement agents can check to determine if proper tax has been paid within a specific locality. In Northern Virginia local taxes can range from a low of 15 cents in Warrenton to a high of 85 cents in Fairfax City.

Cigarette trafficking is easy money, and there is a lot of it. The ATF estimates black market cigarette sales reach $5 billion annually, the bulk of which flows through the Northern Virginia region. Traffickers purchase cigarettes in Virginia, where the average cost of a carton is $45, and sell them in high tax states like New Jersey, New York and Connecticut where cartons can run as high as $110.

As of July 1, however, the consequence of getting caught in the act of cigarette smuggling has become more expensive. Under a new state law, first-time cigarette traffickers found with 25 or more cartons of cigarettes face a $5,000 fine, $10,000 second and subsequent at $50,000.

The Virginia state tax on cigarettes is $3 per carton, or 30 cents per pack, making Virginia cigarettes some of the cheapest in the country. Jurisdictions in the Virginia also affix a local tax, with rates that can vary widely. The following prices are for local districts as of July 2012.

The law allows enforcement agencies like the ATF, the Northern Virginia Cigarette Tax Board and local police to take immediate action when they spot purchasers in the act. Previous enforcement protocol maintained that a trafficker had to be caught crossing state lines, a time-consuming process as officers at times tailed traffickers for hours to make an arrest.

“We knew the scope of the problem Virginia was having, but we really had no teeth to act,” said Paul Carey, chief enforcement officer with the NVCTB, a tobacco enforcement agency that monitors 17 jurisdictions in Northern Virginia.

The law is aimed squarely at what enforcement officers call the “smurfs” of cigarette trafficking. These individuals work with a ringleader and buy small quantities of cigarettes at a time from different distributors. By purchasing only a few cartons at a time, cigarette sales do not spike which would otherwise alert law enforcement.

Cigarette trafficking is a dangerous activity due to its criminal nature. “What we are looking at is the violent crime involved with cigarette diversion, criminals will trade narcotics and guns for cigarettes,” said Mike Campbell, a spokesman for the ATF. “People are willing to kill others if they become too much of a competitor.”

Democrats and Republicans came together over the issue, and the law was passed unanimously in both the Virginia House of Delegates and the State Senate. “The intent was to bring state law in line with federal law,” said state Sen. Adam Ebbin, who voted for the legislation. “I don’t want to limit prosecution of a crime because we can’t use a state charge.”

“The law was designed to give state and county law enforcement officers the ability to stop [cigarette traffickers],” said Del. David Albo, R Springfield, who sponsored the measure in the house. “The problem was created once New York raised cigarette taxes so high that running cigarettes was more profitable than running drugs.”

According to Keenan Caldwell, Virginia state director of the American Cancer Society, the purpose of cigarette taxes is to price youth out of the market, and to fund smoking cessation programs. A one-penny rise in the price of cigarettes through state taxes equates to an additional $5 million to the state coffer. In 2004 the state tax on cigarettes was raised from 2.4 cents to 20 cents per pack, and the subsequent year was raised again by a further 10 cents.

“People are willing to kill others if they become too much of a competitor.”

“We have a proactive approach to raising cigarette taxes in Virginia, it really serves as a deterrent for children and kids to stop smoking. We’ll raise the price to whatever level we can get them,” said Caldwell. “We understand and recognize cigarette smuggling takes place in Virginia, anything that can be done that curtails the use of the product would be good.”

The legislation was actively supported by the Richmond-based tobacco company Philip Morris, and parent company Altria. “We were very much involved, we testified at the General Assembly, and talked with members in the senate and house,” said David Sutton, a spokesman for Altria. “This type of activity is outside the legitimate distribution system. Illicit distribution does not check for age, and underage sales are not good for us. ”

Money matters for cigarette companies, and Altria is especially concerned smokers will use black market cigarettes of low quality. “The consumer has no way to know how the product was handled, it would not be in nearly the same shape if it was stored in a sun-baked car,” said Sutton. “If the consumer lights up and is very disappointed with the poor quality he will turn to another brand.”

The company pushed lawmakers to consider cigarette smuggling as a felony, rather than the misdemeanor charge that made it into the law.

In addition to an intense lobbying campaign to pass anti-cigarette trafficking legislation, Philip Morris and Altria have engaged law enforcement agencies with high-end informational videos that detail the tactics of cigarette smugglers. The prevalence of counterfeit tax stamps, as well as counterfeit cigarettes, is also a concern for Altria.