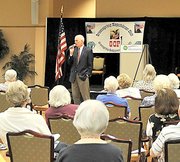 Colonel Chris Perkins, who just won the Republican nomination for a seat in Congress from 11th District talks to seniors at Greenspring in Springfield.

As Col. Chris Perkins spoke to an enthusiastic group of seniors at Greenspring in Springfield about his plans for Virginia’s 11th District, there were quite a few retired soldiers in the audience gathered to hear him.

Perkins made it clear that he had a serious difference of opinion with his – now former - opponent, Ken Vaughn, on military funding.

With regard to the U.S. Rep. Gerry Connolly’s bid to retain his seat in November, Perkins believes that "the deficit in leadership of the country must be addressed as the focal point of attention." Perkins showed his listeners how every cent of every dollar is currently allocated for the country’s expenditures. He then went on to explain how the Fairfax County budget is presently structured, illustrating the high level of difficulty for County residents and especially for people entering the job market.

Quite a few residents had concerns about healthcare, and Perkins assured them that he would be actively involved in efforts to turn around any legislation that would further damage Medicare. For many people, Obamacare is a "great cloud hanging overhead," and while Connolly was quick to support this legislation, Col. Perkins gave assurances that he will be working to reverse it.