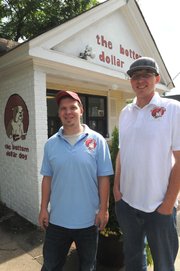 Walter Williams began his restaurant career in 1952 when he opened Mom's Kitchen at the corner of N. Pitt and Oronoco streets. The success of his first restaurant led him to start other restaurants in Alexandria, including Little Joe's Carry Out, Williams Sandwich Shop, and Williams Soft Cream.

His low-cost model and friendly demeanor made Williams a well-liked figure in the community. "He was the best boss I could ever ask for," said Jean Kelley, who began working for Williams in 1979, "he was more like a dad. He was a good guy and had a kind heart."

When Williams died Feb. 3, 2011, his grandson inherited his Wilkes Street property. The building had been empty for years. "It sat abandoned for four and a half years collecting dust," said Williams-Parker. "Literally I would stand around and look at it. I would remember being in there as a kid."

Williams-Parker, who had already managed a few restaurants in Virginia Beach, had always imagined starting his own restaurant in Alexandria as his grandfather had once done. "I could not get the idea out of my head," he said, "so finally I went over to my buddy and I said: you think we got enough money for this? Then let's bet the farm."

Williams-Parker enlisted Patrick Thompson as his business partner, who had been friends with him since they sat next to each other on the bus throughout high school. Once they pooled their money together, Williams-Parker quit his job at a bank, and the two began to make their vision into reality.

They named their restaurant The Bottom Dollar Dog as a reference to the historic name of the area in Alexandria near the water, or “the Bottom.” But they also intend the name to allude to the restaurant's low prices. Williams-Parker inherited this philosophy from his grandfather. "There's nothing on the menu more than $6," he said, "that's how my granddad used to do it, and that's what we're doing to do it."

In a city where food can be pricey, Williams-Parker maintains the importance of providing Alexandrians with inexpensive food. "It's very difficult to get a lunch in this town for less than $12," he said, "and a lot of our clients can't afford a $12 lunch, especially not daily."

But the restaurant appears to be building a dedicated cohort of followers. The owners report repeat customers. They even notice some customers returning to their restaurant twice in one day. Thompson tells a story of a customer who bought 10 hotdogs and a cheese steak for $40. "The person said: 'wow, that's insane.' And we were a little worried," Thompson said, "then he said: 'feeding 10 people for $40, that's a great deal.' We thought that was pretty nice."

For those who had fond memories of Walter Williams and his restaurants, they will find The Bottom Dollar Dog a familiar experience. His love of people and food was well known. "He [Williams] would talk to anybody," said Kelley, "he loved kids, he loved dogs, he loved everybody."

That spirit still remains, said Kelley, "I see a lot of him in Keith."