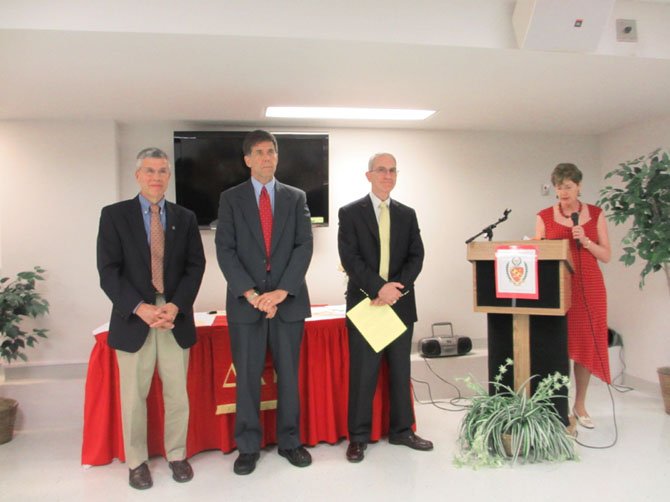 Local school staff and community groups, from building supervisor to principals and Vienna Optimists, were recognized by the Vienna-area chapter of Delta Kappa Gamma education society for going beyond job descriptions to benefit school children. Alpha Nu, at its banquet on June 15 at First Baptist Church of Vienna, presented "Golden Eagle" pins and certificates and red carnations to each of its 16 honorees. From Vienna, the First Baptist Church of Vienna Tutorial Program, the Optimist Club of Greater Vienna, and Juda Epstein, teacher at Louise Archer Elementary School, were honored for their service.

"We’re honoring those individuals, selflessly and without an agenda, who go about helping children every day," said Alpha Nu president Pamela Hock.

Optimists International dedicates its resources to school-aged children and childhood cancer support for children and their families. Local chapters create their own programs to further these missions. The Optimist Club of Greater Vienna sponsors competitions, from oratorical contests for deaf and hearing-impaired students to high school awards, and holds an annual fundraiser for "Growing Hope," a local support system for families with a child in cancer treatment. The Vienna chapter also provides a donation to Johns Hopkins University to be used in childhood cancer research.

Tutors in the First Baptist Church of Vienna tutorial program come from throughout Northern Virginia, as well as from Vienna, every Monday night, to provide one-on-one help for students from any school in the area. While these are primarily struggling students who ask for help, there are others who want to improve their levels of understanding.

Juda Epstein, who teaches at Louise Archer, left an unfulfilling career in law to become an educator. The Board applauded Epstein’s efforts to keep parents informed of their children’s learning environment, such as weekly photos of students in-progress that are e-mailed to parents.

One of the more moving presentations went to Lemon Road ES building supervisor Jorge Sanchez, who is friend to students as well as preserver of the building and its grounds. "For many students," Sanchez’s nomination read, "he is the only truly positive male they have in their lives."

Alpha Nu’s Golden Eagle Awards program was started in 1992 to recognize teachers who went the extra mile, said program chair Shirley McCoy. The program went idle after a while but was resurrected in 2012 to embrace anyone in the community supporting student achievement.

"We want you to know that your work does not go unnoticed," McCoy said. "You have touched a child in some way, some time, every day."