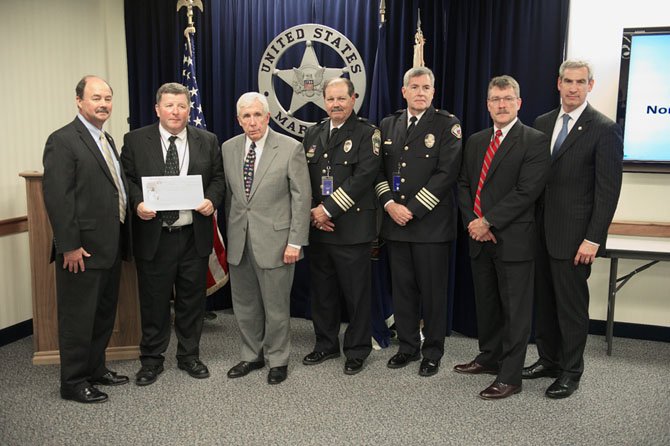 The fight against gang activity in Northern Virginia received a financial boost last week in the form of an $850,000 check from the Department of Justice Assets Forfeiture Fund. U.S. Marshal for the Eastern District of Virginia Bobby Mathieson presented the check to Ray Colgan, executive director of the Northern Virginia Regional Gang Task Force. The raid of an illegal gambling operation in Falls Church in August 2011 led to criminal asset forfeiture of more than $1 million.

The funds received last week will be used for expenses such as a tattoo removal program, car leases, police overtime, equipment and training.

U.S. Rep. Frank Wolf (R-10) attended the presentation and spoke about his appreciation for the hard work of law enforcement officers on the task force and how their efforts have made the community a much safer place.

The Department of Justice Asset Forfeiture Program encompasses the seizure and forfeiture of assets that represent the proceeds of, or were used to facilitate, federal crimes. The primary mission of the program is to employ asset forfeiture powers in a manner that enhances public safety and security. This is accomplished by removing the proceeds of crime and other assets relied upon by criminals and their associates to perpetuate their criminal activity against society. Asset forfeiture has the power to disrupt or dismantle criminal organizations that would continue to function if we only convicted and incarcerated specific individuals.