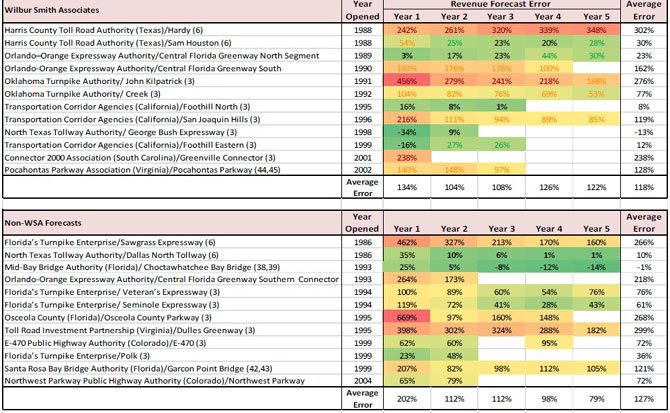 Part of the Reston Citizens Association’s response to a forecast of traffic and revenue for the Dulles Toll Road by Wilbur Smith and Associated.

Reston — The Reston Citizens Association released a report last month calling into question the toll and revenue forecasts done by CDMSmith, then known as Wilbur Smith and Associates. The forecasts were done to estimate costs and other planning measures for Phase Two of Dulles Metrorail.

The RCA feels their study of the forecasts shows that "many large errors" have been made in their forecasts, which in turn is harmful to investors, bondholders, governments and toll road users who are relying on those numbers.

The report cites what researchers have called "optimism bias," which it says has been documented in a number of recent toll and revenue forecasts.

The bias shows a propensity to forecast more traffic and higher revenues than previous experience demonstrates.

A National Highway Cooperative Research study conducted in 2006 studied forecasts and results in the first five years of 26 different toll roads around the country. The study found that the forecasts for these revenues were overestimated by an average of 109 percent per year.

The Metropolitan Washington Airports Authority’s latest projections indicate that more than $3 billion in debt will be issued to finance the Silver Line costs.

"Nobody has ever tried to put $3 billion of additional debt on a toll road and succeeded," said Terry Maynard of the RCA. "Historically, these forecasts have led to serious defaults and bankruptcies."

As a result of their report, the RCA says they would like a second, independent forecast by another group prior to any decision to move forward with Phase Two construction, and they recommend VDOT undertake that task.

They also call upon MWAA, Fairfax and Loudoun Counties to defer any decision until that analysis has been completed.

Fairfax County Chairman Sharon Bulova said she shared the RCA’s report with Board of Supervisors Auditor Michael Longhi, who agreed that the projections "are not without fault."

"The traffic and revenue analysis for the Dulles Toll Road is a key factor in our decision to continue supporting Phase Two of the Silver Line," she said in a letter to the RCA. "I agree that the projections must be accurate and comprehensive. However, halting progress on the Silver Line in order to conduct a separate analysis at this time would be costly, time consuming and may not produce more accurate predictions."

Members of the RCA are scheduled to meet with MWAA Chairman Andrew Rountree and members of CDMSmith this Friday. Meanwhile, Fairfax County is hosting a series of public meetings March 12 through 19 as a lead up to the Board of Supervisors’ public hearing on Phase Two on March 20 at 5 p.m.