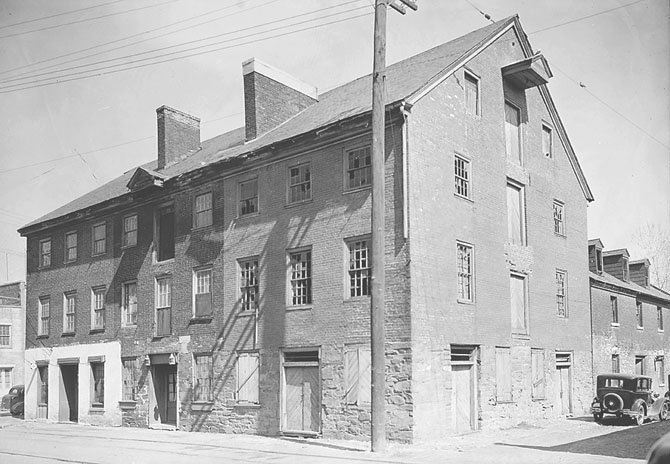 By 1937, the Fitzgerald complex was largely abandoned. Library of Congress

The city of Alexandria enjoys a rich and colorful history, one that began in colonial times and has encompassed periods of industrial concentration, wartime pressures and residential booms. A few physical reminders of those past eras endure, but sometimes they are hard to find or recognize.

Today, Frappuccinos and gifts have replaced tobacco and grain at 100 and 104 Union Street. Although not visible in this image, the front of the building has a pronounced tilt toward the river.

The three-story building on the southeast corner of King and Union Streets is good example of a structure with major historical bones. The section facing Union, which hosts the Virginia Shop and Starbucks, dates to about 1781. In the jargon of city historians, it’s Fitzgerald’s Warehouse.

John Fitzgerald, a military aide to General George Washington during the Revolutionary War, acquired the property while home on leave in 1778. At that time, his one acre largely consisted of a mudflat, but fill extended the shoreline and soon three conjoined warehouses arose on the site. By 1789, a 50-foot-wide wharf served the facility. Fitzgerald was an Alexandria mayor and a founding patron of St. Mary’s Church.

Thomas Irwin and family owned the warehouses and wharf through 1881, and afterward Julius Dreifus bought and sold hides and junk there.

Justus Schneider opened the building’s first restaurant in 1867. Others followed over the years — Brill’s, Ketland’s “Bill’s Old Anchor” and the Seaport Inn.

The wings on the east side of the main structure have come and gone since Irvin added two before the Civil War. Part of current north wing dates to 1962, and the other river-facing structures are much more recent developments.

Wales Alley, between the Fitzgerald warehouse and Virtue Feed and Grain, dates to 1789 but was known in the 1800s as Fitzgerald’s Alley or Dock Street.