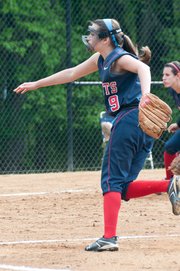 Wootton pitcher Casey Haynes threw a complete game and did not allow an earned run as the Patriots defeated the Whitman softball team on April 30 to win the 4A South Division championship.

Potomac — After seven innings and 100 pitches with the 4A South Division championship on the line, Wootton senior Casey Haynes stood behind her home field’s third-base dugout with a bag of ice on her sore right shoulder. It’s not something she likes to do, but Patriots head coach Alton Lightsey pleaded with his ace hurler to perform postgame pitching-arm maintenance.

"I’ve just never been in the habit, but my shoulder is getting sore because I do pitch most innings," Haynes said. "So I’ve got to make sure that it holds out through the season."

Facing Whitman on April 30 with the division title up for grabs, Haynes showed why the durability of her right arm is pivotal to the success of the Wootton softball team.

Haynes held the Vikings to one unearned run in seven innings as the Patriots secured their first division crown since 2008 with a 2-1 victory at Wootton High School. Haynes allowed four hits and walked two while striking out five during her complete-game effort. She threw 68 of 100 pitches for strikes and delivered a first-pitch strike to 25 of 29 batters. Lightsey said Haynes didn’t have her best stuff until the seventh inning, when she retired the Vikings in order in six pitches.

"I definitely felt like I had to buckle down," Haynes said of her effort in the seventh inning. "I knew if I shut down [Whitman] that inning we wouldn’t have to go up to bat again and that was really important. And it was the division championship, so I really wanted to make sure we got out of there as quick as possible."

"Casey has learned how to pitch and actually become a pitcher this year," Lightsey wrote in an email. "She has multiple pitches she can throw, she hits locations and her ball has a lot of movement."

"I definitely felt like I had to buckle down [in the seventh inning]. I knew if I shut down [Whitman] that inning we wouldn’t have to go up to bat again and that was really important. And it was the division championship, so I really wanted to make sure we got out of there as quick as possible."

The victory against Whitman improved Wootton’s record to 10-2, including 5-0 in the division. Lightsey credited pitching and defense — no team has scored more than four runs against Wootton — for the Patriots’ success, along with team chemistry. 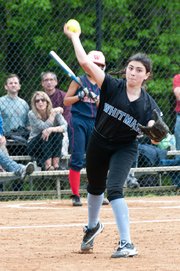 "The girls have bought into the idea that if we execute on the defensive side of the ball and force teams to have to earn their runs, then good things will happen," he wrote. "We also have an experienced (nine juniors), deep team where we can plug players into different positions and not lose much, if anything, at all. Finally, the girls like one another. Team chemistry is extremely high."

Wootton also benefitted from timely hitting on Monday. After the Patriots managed just one run in five innings against Whitman pitcher Helen Rosenthal, center fielder Hallie Rolfes drove in the winning run with a two-out single in the sixth.

Rosenthal suffered the tough-luck loss, allowing two runs — one earned — and five hits while walking two and striking out three in six innings. At the plate, the junior drove in Whitman’s lone run with a two-out double in the fifth.

Rachael Strauss had two hits for Whitman, which dropped to 6-6 and had its five-game winning streak snapped. The Vikings will travel to face Paint Branch at 3:30 p.m. on Wednesday, May 2 and Northwest on Friday, May 4.

Wootton will host Blair at 3:30 p.m. on Thursday, May 3, when the Patriots will once again look to Haynes for a big performance in the pitcher’s circle.

"[My shoulder is] pretty sore," Haynes said after beating Whitman, "but it will be good by Thursday."