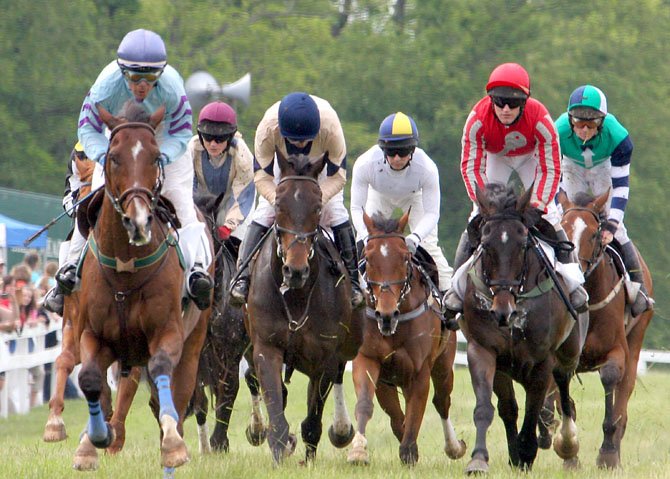 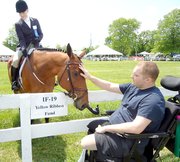 On May 20, the horses will be ready and waiting for the flag to drop, racing fans will be lining the track, tailgating and enjoying catered feasts, and the rails will be filled with young and old — waiting to hear the sounds of hooves and see the brilliant jerseys flash by in the 60th Potomac Hunt Steeplechase Race.

The first running of the Potomac Hunt Races took place in 1952 — and has been an annual event ever since. Steeplechase racing originated in Ireland in the 18th century and then the English and U.S. adopted it. Named for the high church steeples which were often the village landmark, the course would often begin at an agreed-upon starting point, and the racers would dash their horses over ditches, fallen timber and whatever lay between the start of the race and the ending point at the church. Steeplechase races are now conducted on regular racecourses which vary in length between 2 and 4 miles.

"We knew immediately that the Potomac Hunt Races would be a great fit for our outreach efforts," said Marie Wood, director of special projects. "It’s a great venue for family entertainment, while simultaneously generating income for YRF, and, more importantly, celebrating the unwavering dedication of our soldiers." Started 6 years ago by volunteers from Bethesda, Potomac and Chevy Chase, the YRF has provided more than 1,400 free rental cars, 18,000 taxi rides, 9,000 free hotel nights, thousands of tickets to sporting games, concerts, plays and hours of mentoring and guidance to support the service members and particularly their families.

The partnership between the Potomac Hunt Races and the YRF was formed by Race Co-Chair and Master of the Hunt Beverley Bosselmann and her husband Rainer. As avid fox hunters, they had been involved with the Potomac Hunt since 1996. However, when their son Kirk, serving in Iraq as a Marine scout sniper was killed in Fallujah in 2004 at age 21, they decided to honor him by supporting the troops through the YRF. For the past three years, Bosselmann has arranged for the proceeds from the Potomac Hunt Steeplechase Races to go directly to YRF. A pony race is held each year in memory of their son.

"We are expecting a bus of injured service members and their families from Bethesda Naval Hospital," said Bosselman. "Usually we have 3,500 to 4,000 people — and we are hoping that warm, sunny weather will bring out even more. The races are a wonderful Potomac event."

Last year, eight families arrived on a bus from Walter Reed. Bosselmann met Army Specialist Chris Kurtz, a double amputee injured in Afghanistan. She escorted Kurtz and his mom to a rail where they could get a close-up view of the timber jump. Kurtz commented that he had never been to a steeplechase — but found it interesting and very exciting. His mom thought the race was terrific.

The Potomac Hunt Races is a child-friendly event which features pony rides, a moon bounce, face painting, washable tattoos and more. There will be also a presentation of colors by the Maryland National Capital Park Police, horseback riding demonstrations, and shopping on vendor row.

The races will be held at Kiplinger’s Bittersweet Farm, 14401B Partnership Road in Poolesville on the afternoon of May 20. The gates open at 11 a.m. and the first race starts at 12:30 p.m. General admission parking passes to the races are $30, and rail side parking passes are $200.

To purchase tickets, tents, banners or vendor spaces, visit www.potomachuntraces.com. For more information on the Yellow Ribbon Fund and the many ways they serve the veterans, visit www.yellowribbonfund.com.