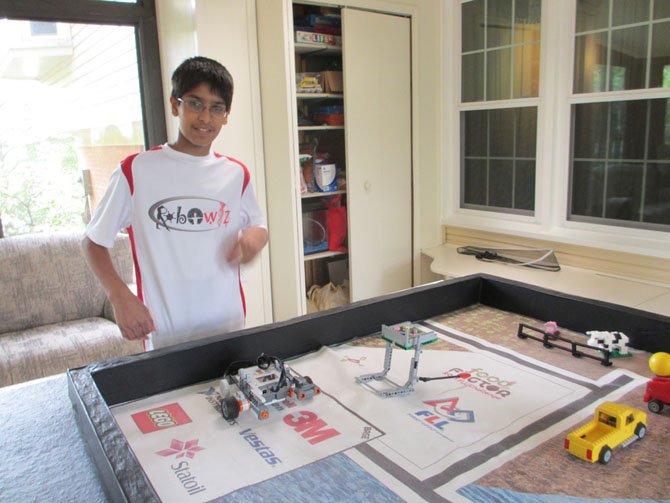 Neeraj Prasad, a Vienna 13-year-old 7th-grader, loves science and technology so much so that he lives for science and technology. For three years, Neeraj has participated in the FIRST LEGO® League (FLL) competition, a partnership of the LEGO® Company and non-profit FIRST [For Inspiration and Recognition of Science and Technology]. And this year, Neeraj and his fellow Robowiz team members were in Florida to compete in the 2012 FLL World Open Invitational Championship held at Legoland.

"Math and science are my favorite subjects," said Neeraj. "I like math and science because of their real-world value. Both are essential in not only expanding our knowledge, but to conquer problems plaguing society today."

Robowiz was one of two VA/DC Region teams invited to the May 3 to May 6 FLL Florida competition, hosted by the University of South Florida, All Saints’ Academy, Legoland Florida, and AT&T Inc. Neeraj is the only Vienna-area student on the Robowiz team; the other team members live in the Chantilly area.

Neeraj’s mother reported from Florida that Neeraj and his team did "extremely well" in the FLL World Invitational Competition. They were the third-place grand champions, beating out 63 other teams. There was a substantial international presence with teams from Spain, France, Holland, Germany, Bermuda, Cayman Islands, Japan, China, South Africa, Brazil, Denmark, Canada, Israel, and the U.S. commonwealth of Puerto Rico, among U.S state champions.

THE FIRST LEGO® League competition covers three components and teams begin competition at the regional level in the fall and move on to state competition. State champions are invited to the world competition.

In Neeraj’s sun room is a table mat replicating the steps all teams’ robots will face. It takes Neeraj just minutes to design a program that will command his robot to perform a simple-looking challenge. The robotics component is the "fun" part for the participants.

The "real-world" challenge component for the 2011-12 FLL competition was "Food Factor," an exploration of techniques and research that scientists use to keep the food supply safe. Team Robowiz produced a patent-pending grocery bag, referred to as C.L.E.A.N. (Combat Lettuce-E. coli Awesomely & Naturally) Grocery Bags. The C.L.E.A.N. grocery bag solution kills foodborne bacteria like E. coli on the surface of any produce, such as lettuce. Studies show that oil extracted from coriander seeds can kill many foodborne disease causing bacteria like E. coli, Salmonella enterica and MRSA.

Robowiz encapsulates coriander oil in a slow-release, food-approved natural polymer, and coated the grocery bag with this polymer. When a consumer loads the bag with any produce, the foodborne disease causing bacteria on the produce will be killed with the oil released from the polymer. The bag is made of reusable, organic, washable fabric and can be re-coated when the effect of the coriander oil is reduced. C.L.E.A.N grocery bags were designed to prevent and kill foodborne pathogens. Robowiz’s solution is a global semifinalist after it was voted second place in the 2012 FLL Global Innovation Award.

"My team researched the subject thoroughly, eventually finding a solution in coriander oil," said Neeraj. "In doing this, I visited many professors and scientists, fostering my appreciation for math and science.

NEERAJ GOES FURTHER in his passion than competition and that is what gives the Longfellow student a distinctive edge. Neeraj partnered with two fellow Longfellow students to create their own kind of math mentoring program for the young teens who frequent the Town of Vienna’s teen center, Club Phoenix. Once a week, every week since January, the budding scientists spend 30 minutes working with about 15 of the 20 regular Club Phoenix participants. The mentors are basing their teaching on the Math Counts program.

"We’re doing this because most of the kids are learning the regular math taught in the schools, but, we’re trying to teach problem-solving techniques and tricks to solve harder problems," said Neeraj.

Neeraj and his partners are teaching algebra, number theory, counting, probability and geometry, areas the typical sixth or seventh-grader does not examine.

"We’re definitely challenging them more than what they get in school, but, we’re also exposing them to concepts they never would have learned in school, so far."

To learn more about Robowiz, see bit.ly/vote4rrms. For details on FIRST Lego League, go to www.firstlegoleague.org.