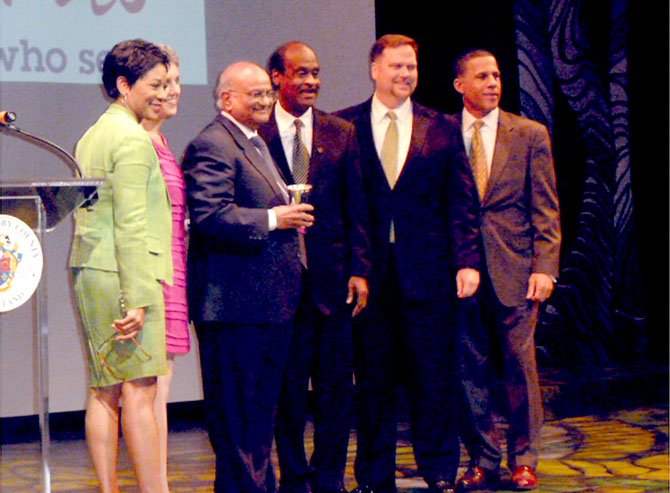 Almost everyone can remember their feelings, thoughts and where they were on Sept. 11, 2001. For Tufall Ahmad, an American Muslim living in Potomac, “on Sept. 11, 2001, everything changed. I realized the need for Muslim Americans to redefine their identity. 9/11 opened my eyes to where we are living, and how the U.S. has given us everything.”

He met with other Muslims and recognized that, “It is not a time for us to hide, but to give back by volunteering in charitable endeavors. It is time for us to get out, become engaged and to make a solid contribution to the charitable activities going on in the county.” As a result of this realization, Ahmad helped found the Montgomery County Muslim Foundation (MCMF), a community service organization which provides food, clothing and transportation throughout the year for those who are less fortunate. His service in Montgomery County as a leader who spearheaded the service projects has helped bridge the gap that formed after 9/11 between Muslims and the community.

On Monday, April 30, Ahmad was the recipient of the 2012 Neal Potter Path of Achievement Award which honors Montgomery County residents age 60 and over for their exemplary volunteer work. Ruby Rubens of Silver Spring, Md. was the other honoree. Many Potomac residents are familiar with Rubens for her advocacy work for fair housing in the historically black communities of Scotland and Tobytown. The standing-room-only event took place at Imagination Stage in Bethesda.

Seventy-five-year-old Ahmad was born in northern India, and then moved to Pakistan as a young man. In Pakistan, he became a high-ranking auditing and accounts official. He came to the U.S. in 1968 to work as an auditor for Pakistan at the United Nations and after three years with the UN, he decided to remain in the U.S. to establish his own company. He now resides in Potomac with his wife Sajida, son, daughter-in-law and three of his grandchildren.

MCMF members believe in giving back in every way they can. In April, they collected 17,000 pounds of food for Manna Food Center. On Thanksgiving, holiday dinners, toys and clothing were delivered to more than 200 needy Montgomery County families. This past year, they fed almost 1,000 people at the Community for Creative Non-Violence in Washington D.C. during Ramadan. They also prepared three meals a day and collected clothing for Sophia House in Rockville. Throughout the year, the group works with community partners to eliminate hunger, provide senior assistance and help with community development projects in education, legal assistance and health care. They also supply transportation to medical clinics and to community centers for the elderly.

Ahmad has been leading charitable projects since MCMF was founded. “We have found that our projects are easier because we all pitch in. We involve the entire family. Our children are very proud of being able to help the community they live in through their faith. They are proud to be Americans and feel very satisfied helping others,” he said.

“Since I retired in 2000, not one day goes by that I do not volunteer. I am just happy that I can help members of the community to have a better life — and make our community a better place.” Ahmad believes that helping the poor gives the community an insight into the faith of Islam. “Our feeling is that what we have done so far has changed many people who now realize that Muslims are the same as they are. Basically, we are all the same.”

He is grateful for the Path of Achievement Award. “By giving the award to me, you are acknowledging the contributions of the Muslims in Montgomery County. And that is a great thing.”