Rocky Run Against the World
Votes

Rocky Run Against the World 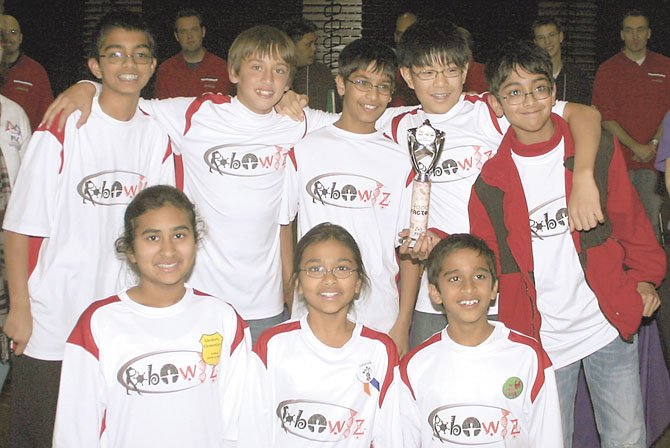 Chantilly — With food safety being of vital importance these days, a group of students mainly from Rocky Run Middle School created a way to prevent e coli from forming in reusable grocery bags. For their efforts, they took second place in a state championship and third in the world.

Some 2,000 teams from Virginia entered the FLL competition, with Rocky Run beginning its winning streak by capturing first place in Regionals. Then last week, May 3-6, in Winter Haven, Fla., Robowiz competed in the FLL World Invitational Open against 64 other teams.

For its groundbreaking research on food safety, Rocky Run was the only Washington Metropolitan area team in the semifinals for the FLL Global Innovation award. This honor recognizes teams doing innovative research that has the potential to make a difference in people’s lives. As such, Rocky Run was one of the top 20 teams worldwide and among the top 14 in the U.S.

Except for Neeraj, of Vienna, all the Robowiz members live in Centreville or Chantilly, but they all attended GBW for its GT program. “I loved playing with Legos when I was little, so my dad created his own FLL team and introduced the concept to this area,” said Shomik. “He had an interest meeting at GBW when I was in fourth grade, and we started the name, Robowiz.”

Now, the team members meet on weekends and a few times in the summer, during the year. And when they can’t get together in person, they collaborate via Google Docs and Skype. “And we work on background research on the Internet,” said Abha.

The FLL competition has four components; teams are judged on robot performance, robot design, research and teamwork. This year’s topic was food safety.

“The mission in robot performance [at States] was to complete challenges, such as putting fresh fish in a sink without contaminating the sink, mat or fish — and all these things were made out of Legos,” said Shomik.

“It’s an obstacle course, so you build a robot — about 8 inches or so tall — out of Legos,” said Jami. “Then it goes through 16 challenges.”

“The robot has 2 and a half minutes to do as many challenges as it can to get the most points,” said Nitya.

“In robot design, we display the structure of our robot and the things it can do,” said Akshay. “We show the innovation behind it.”

Said Nitya: “The judges look for the sensors attached to it, like sound and light.” Abha explained that the sensors “are to guide the robot and help it go through the maze.”

“The judges grade you on how you designed the robot to complete the challenges,” added Adithya. Shomik said the teams were told what the challenges would be, two months in advance, so they could build their robots accordingly.

“They also look at your programming,” said Nitya. “We used MindStorm.” In that program, said Shomik, each of the robot’s movements is designed in a block “to show you have a deeper understanding of programming.”

For the research component, said Akshay, “We had to find a problem related to the topic and come up with an innovative solution.” Added Shomik: “We’re graded on how well we’ve researched and presented the topic.”

“It had to be something ‘out there,’ but also viable and practical,” said Abha. And, said Adithya, “It helps to have a problem that solves a major issue.”

That way, said Shomik, “It would affect a large amount of people and have a greater impact.” Nitya said they also examined existing solutions for their problem and explained why theirs is more useful and helpful.

“We also had to consult experts and share our research with the community,” said Shomik. “So we talked to experts at the NIH and Johns Hopkins University Medical Center.” The students also talked with the owner of a hydroponic farm in Haymarket about his lettuce, as well as professional food inspectors.

“Each of us researched five foods we commonly eat, and we decided to focus on lettuce because it’s eaten raw and uncooked,” said Jami. “And leafy greens are one of the top-riskiest foods, according to the FDA, because of that.”

The students also knew of e coli outbreaks in lettuce, in recent years, and found a study done by a university in Portugal saying that oil extracted from coriander can kill e coli and other pathogens. And, said Akshay, “Since there’s been an increasing trend in using fabric bags in grocery stores, we based our project on that.”

So they searched for a way to prevent the possible transference of e coli in lettuce to those bags. “We wanted to use the Portuguese study in our research, so we decided to spray the interior of a reusable grocery bag with coriander oil,” said Shomik. “It would diffuse into the grocery bag and destroy any e coli bacteria on it from produce.”

“Initially, we were focusing on lettuce,” said Akshay. “But we found this could apply to many types of produce.”

“We wanted the coriander to release slowly so it could diffuse in the bag for a few days,” said Abha. “So we contacted Dr. Munmaya Mishra, a polymer scientist in Richmond. He helped us with our research last year. We asked him if we could use polymers to slowly release the oil, and he said we could use alginate — derived from seaweed — or pectin.”

Both are FDA-approved, natural and water-soluble. “So he suggested using calcium chloride and cross-linking it with the polymers to form an invisible mesh,” said Abha. “That would allow the coriander oil to release slowly. So we made an emulsion with the coriander oil and pectin.”

Both pectin and alginate would work, said Nitya, but pectin’s easier to find in stores because it’s used in jams. “We also made a liquid solution with calcium chloride and distilled water, and we put the emulsion and the liquid into two different spray cans,” said Abha. “So the consumer just has to spray the inside of the grocery bag, first with the emulsion and then with the liquid, to prevent contamination.”

The Robowiz team has also applied for a patent on its creations and, said Abha, “An expert from Johns Hopkins said they could create these products in their lab.”

Regarding the teamwork component, the judges at States gave the students a challenge requiring teamwork to complete. “We had to build a ramp out of Legos, roll a ball down it and knock off pins,” said Akshay. “It was to see if we got angry with each other or talked things over, accepted ideas and tried to work out solutions together. They also wanted to see how we worked under pressure.”

“We’re also judged on how we deal with each other and with other teams while waiting to be judged at the competition,” said Shomik. Added Nitya: “They judge if you have ‘gracious professionalism,’ respecting other teams and helping them.” Akshay said good sportsmanship is important, as well.

They were all excited about going to the world competition because it was in Florida, the awards ceremony was held at Legoland and they’d see other students’ projects and robots. Most of all, said Abha, they looked forward to “having a wonderful experience and meeting kids just like us from other countries.”

They also thanked their coaches, Abha’s and Nitya’s mom, Roli Agrawal; and Akshay’s dad, Balaji Subramaniam; for their guidance. And although they didn’t win Worlds, said Akshay, “It’s not about the glory, it’s about helping people.” Agreeing, Nitya said, “Our motto is ‘Technology for Humanity,’ and our project will keep people from getting e coli.”