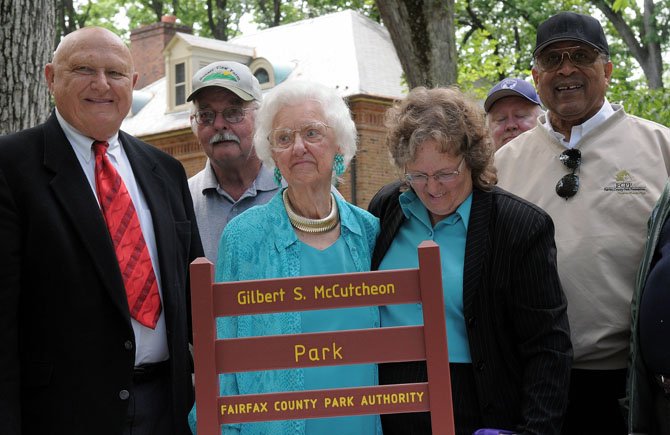 Mount Vernon Supervisor Gerry Hyland Frances and Bonnie McCutcheon, Richard Settle, William Bouie and others join in for the unveiling of the new sign designating the park as the Gilbert S. McCutcheon Park.

Alexandria — Family, friends and neighbors of Gil McCutcheon gathered on the hilltop of Lamond Community Park on Saturday, May 12 for a ceremony to rename the park for the late Gilbert S. McCutcheon. McCutcheon was a key player in negotiations and acquisition of the 18-acre site off Fort Hunt Road. He also ensured that the home on the property would be preserved.

McCutcheon served for 18 years as the Mount Vernon District Representative on the Fairfax County Park Authority. Under his stewardship, the Laurel Hill property was acquired, renovations were made at the Mount Vernon RECenter, Grist Mill Park developed a new concert series and an off-leash dog park, state-of-the-art synthetic turf fields were put into use in South County and the Park Authority secured in perpetuity the historic Colchester Park and Preserve.

He also served as Market Master of the Mount Vernon Farmer’s Market and as a member and officer of the governing board at Frying Pan Farm Park. He was the recipient of the Distinguished Volunteer Service Award from the Virginia Recreation and Parks Society and of the Lawrence V. Fowler Award, presented by the Fairfax County Board of Supervisors.