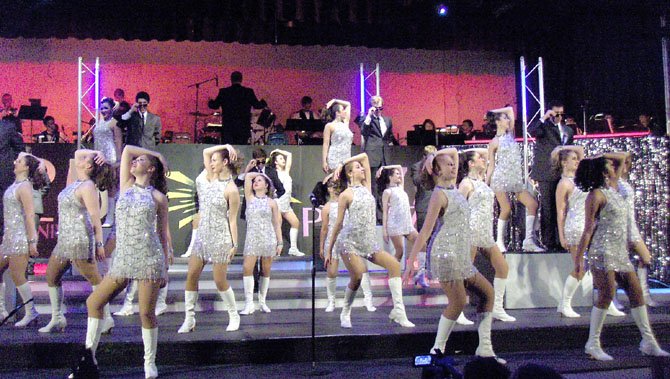 Students vamp to a number from the play, “Nine,” during last year’s Jazz & Pizzazz.

A true, community institution, it’s the kind of production that people flock to, year after year, long after their children have graduated — and even if they never went to Chantilly. The show is just that good, says Choral Director Glenn Cockrell.

“It’s two, full hours of singing, dancing and big-band music,” he said. “People say it’s the quality of the show that keeps bringing them back. They say it’s like a Broadway production that costs way less money to see and is in their own backyards.”

The extravaganza will burst upon the stage Wednesday through Saturday, May 23, 24, 25 and 26, at 7 p.m. each night. Tickets are $10 at www.chantillychoral.org; click on “box office.”

This year’s show is the 26th annual and, said Cockrell, “There’s always something new.”

Some highlights of the Show Choir’s repertoire include some numbers from the current, Broadway musical, “Newsies,” Elvis Presley tunes from “Viva Las Vegas” and a unique arrangement of Alicia Keys’s song, “Empire State of Mind.” There’ll also be a surprise production number involving the audience, and Cockrell says fans of “the longest-running movie ever” will want to participate.

Several students will sing solos, including Natalia Rodriguez, who’ll perform Beyonce’s “Love on Top,” and Mark Fearson, who’ll do a revival of “Zoot Suit Riot” while on stage with the other males in the choir.

“As always, the kids have done a stellar job accumulating repertoire all year,” said Cockrell. “The students in the choir, jazz band and jazz combo have worked really hard preparing for it.”

“I think of this event as a final exam for my students,” said Ross. “It’s a culminating experience of music they learned in the fall and continued to add through the spring.”

A Duke Ellington song is always included, and this year’s piece is called “Ko-Ko” and features the trombone section. The musicians will also do a special rendition of “Jackson Square.” According to Ross, “It’s a New Orleans tradition after a funeral that a band plays in street-band style. The sound is like a marching band meets a jazz band; the first line is really slow, and the second line is an upbeat, party-type song.”

He’s also excited about a new arrangement of “Rhapsody in Blue” for the jazz band. “People should love it,” said Ross. “Jessica Hiemstra is doing a clarinet solo in it, and she’s going to the Peabody Conservatory next year to major in music.”

William Morgan-Palmer, who plays tenor sax, will also perform several solos, including an extended one in the number, “Boogie Stop Shuffle.”

Every year, said Ross, “My students continue to inspire me to find the most challenging music I can to push them as musicians. Whatever I give them to play, they come back in a couple days, ready, and that’s really exciting.”

“The kids in all these groups are very passionate about what they do in the music department,” added Cockrell. “Their heart and soul is in this. So while not all will go into music, all will take it with them as a part of their life.”

Ross said they start talking about the next year’s show, the minute the current one ends. But, he said, “It completely pays you back for all the hard work with great memories and great experiences.”

Agreeing, Cockrell said, “The kids are inspiring, and people coming to the show will see teenagers doing something positive. But they’re so talented, they’ll make people forget they’re teenagers.”

Senior Lauren So, for example, has sung alto in Touch of Class three years and is in her third Jazz & Pizzazz. “I love being part of a really big show with all my friends and getting to show our talents with different styles of songs,” she said. “We won’t have the opportunity to be in a show like this again in our lifetimes.”

She especially likes the California medley they’ll perform; it was part of the show choir’s FAME competition in March in Orlando, Fla. Toughest part of the show, she said, is “putting the vocals and choreography together — we have so much to remember. My favorite part is doing it with the people I’ve become close with, the past three years; they become our family.”

A bass, senior Mark Fearson has spent two years in Touch of Class. As a sophomore, he was in Chamber Chorale — the highest-level concert choir at the school. “The feeling you get when you’re singing or playing any musical instrument is an out-of-body experience,” he said.

He enjoys his solo in “Zoot Suit Riot” because “it’s fun to sing, is an upbeat, fast-paced jazz song and I choreographed it, too.” He’s also pleased with the influence Touch of Class has had on him. “Before, music was a hobby for me,” said Fearson. “But now, I’m going to college to learn to compose music — first for commercials and then for film scores.”

He said no show is like Jazz & Pizzazz. “It’s like a professional show with high-school students,” said Fearson. “I saw it my sophomore year and was blown away by how much talent there was in a high-school production.”

Musician Hiemstra is in both the Jazz Band and Jazz Combo and plays clarinet, piano and saxophone. She’s played piano 11 years and clarinet, seven years. Besides music education, she’ll also study clarinet performance at the Peabody. She hopes to someday perform in an orchestra, play movie music and be a professor at a music conservatory.

She’s played in Jazz & Pizzazz all four years at Chantilly. “All the songs are entertaining and, with so many styles of music, something will touch every single person,” she said. “I think ‘Boogie Stop Shuffle’ is really cool because it’s full-out, jazz swing and high-energy.”

However, said Hiemstra, “It’s nerve-wracking playing the clarinet solo in ‘Rhapsody in Blue’ because everybody knows it, so you can’t mess up. But I love it because it’s not a normal solo; you have to manipulate the clarinet in such a way that the glissando — a run all the way up the instrument, but smearing the notes as you do — will work.”

Playing the trumpet since fifth grade, senior Karl Vitale chose it because of its sound and range and because it’s fun to play. He said Jazz & Pizzazz “brings the whole community together for an impressive show. Many rehearsal hours — both at home and school — go into it. But it’s fun to work with the choir kids”

Senior James Reed plays trumpet and guitar. “I especially like modern, fusion-jazz music, as well as blues,” he said. “And I can really dig into swing.” Hardest for him is balancing all the rehearsals with four AP classes and the rest of his life. But, he added, “I like putting on a professional show and feeling that this is what people do in the real world. We put lots of time and effort into it, and we want people to come see what we’ve been up to.”