Director Retires On a Happy Note

Robert Hegerich directed The Wakefield Chorale for the past 30 years. Photo Contributed 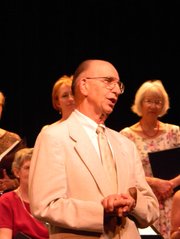 On Sunday, May 20, at NOVA, Robert (Bob) Hegerich directed The Wakefield Chorale for the last time. After 30 years of leadership, he stepped down and will start a new phase in his life, yet to be announced. With his unique one-finger style of directing, he will be missed not only by the 70 plus singers of all ages (from 13 to 90) but the many senior citizens we sang for in the senior residences all over Northern Virginia. Rehearsals were always fun, and yet we worked hard and sounded good. Many friendships were formed within the group because everyone was so friendly, reaching out to newcomers to make them feel welcome. And there were even several marriages.

This last performance had an almost full house, and received a standing ovation. President David Goode presented a gift to Hegerich and flowers to the soloists.

The history of this group goes back to the fall of 1982 when eight members, Bob Hegerich, Mary Hegerich, Carolyn Dankel (accompanist), Mary Anna Stavovy, Sylvia Buonincontri, Harold Kinback, Ken Fitzgerald (deceased), and Jim Gilstrap (deceased), formed and called themselves The Wakefield Chorale. Over the years, the group of eight grew to the current membership.

Through all these years, Hegerich worked tirelessly selecting the music, programming the concerts, and patiently putting up with our

comments, jokes, and antics - all without pay. Several years ago, due to the relaxed atmosphere of the group, Don Wallace (jokingly) presented Hegerich with a whip to keep us in line!

A special party is planned for Hegerich in June. He certainly deserves it.