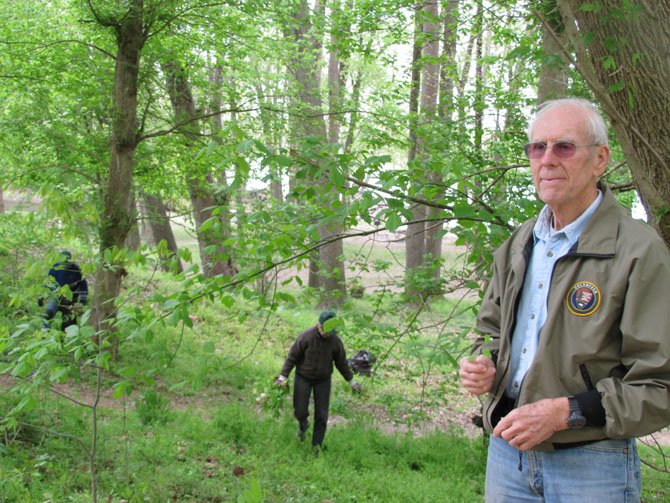 Potomac — The invasive garlic mustard plant has advanced rapidly into the C&O Canal National Historical Park and endangers the ecology of native plants and animals.

“It comes earlier than everything else,” said Jim Heins of the C&O Canal Association. “It forms a canopy that sucks up moisture, blocks sun and leaves chemicals in the ground that is detrimental to other plants.”

Heins recruits and trains volunteers to help curb the growth of the invasive plant from the Potomac river banks.

“You have to consistently come back to the same place,” he said. “It’s going to take a while.”

EACH SPRING the park service offers a series of hands-on training sessions at multiple places along the canal.

The training prevents volunteers from culling native plants. Garlic mustard must also be removed each year from the same identified area for at least five years to be effective. All projects must be approved.

Potomac resident Diane Seward, a conservationist, volunteered this past spring as she has in the past.

“Garlic mustard is going to take over the forest,” she said. “It’s depleting the understory … the habitat for birds.”

Garlic mustard grows in shade or sun and can cross-pollinate or self-pollinate. It is a biennial and in its second year each plant sends out hundreds of seeds. It can soon take over a site and produce seed banks generating thousands upon thousands of seeds. Fast growth is its hallmark, according to the park service.

Rachel Stewart, of Arlington, volunteered last month at Swains Lock. An area of garlic mustard along the canal further up River Road caught her attention. “You can take the entire population of Poolesville High School and have them stand elbow to elbow and you might get it,” she said.

Consistent removal of all second year growth each year, identified by the flowers the plant produces, has proven to be the most effective way to curb the growth of the plant in the future. The second-year plant generally appears in early April and goes to seed beginning in late May and June. Once seeds are sown, they may lay dormant for two to three years before sprouting.

“The second year plant is easier to pull, easier to identify and easier to get a hold of,” Heins said.

“Deer distribute the seeds. They are wonderful at spreading it,” Heins said. “We do the same thing.”

Last month at Swains Lock, two cyclists stopped after seeing the Garlic Mustard Challenge signs Heins placed on the towpath. After answering their questions about the project and about garlic mustard, Heins resumed his efforts pulling the plants with the dozen volunteers he had employed.