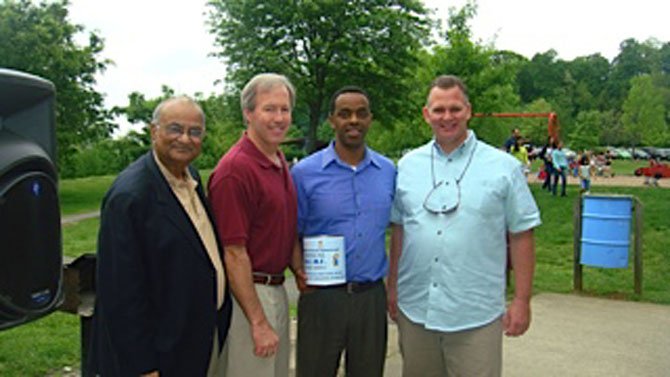 The community cookout was held on May 6 as the culminating event for MCMF’s 2012 Food Drive to thank the volunteers whose energy and efforts were essential to the food drive and to all of MCMF’s work. Mother’s Day was also recognized, since the cookout was held one week prior. MCMF Board members decorated for the event, providing flowers and favor boxes with candies and balloons for the mothers and children.

The mission of MCMF is to enable the Muslim community to work on charitable and effective projects alongside like-minded volunteers and partner organizations in Montgomery County. Last month, MCMF held its annual food drive and in one weekend, collected approximately 10,000 pounds of food. For the first time, the volunteers were stationed inside Giant stores at 10 locations in the county where they were able to engage with customers and ask for donations of non-perishable items.

Jim Perkins, regional director with Giant Foods, applauded the group’s efforts: “MCMF’s efforts in this food drive will go a long way in helping families in need. All of the volunteers who participated in this effort ought to be congratulated.” MCMF also set up drop-off points around the community where food items could be donated.

Guled Kassim, president of MCMF, said, “We are absolutely delighted and surprised by the kindness and generosity of complete strangers in giving food and clothing to help our mission. We could not do it without them. The Muslim members of MCMF have found it extraordinarily satisfying to help provide a safety net for people in need within Montgomery County. “

Other groups were recognized by MCMF at the picnic. They thanked their high school student volunteers whose efforts garnered the most collected items while earning SSL hours, Giant Food and Manna for the growing partnership, and all volunteers who gave their time and talents to support the MCMF.