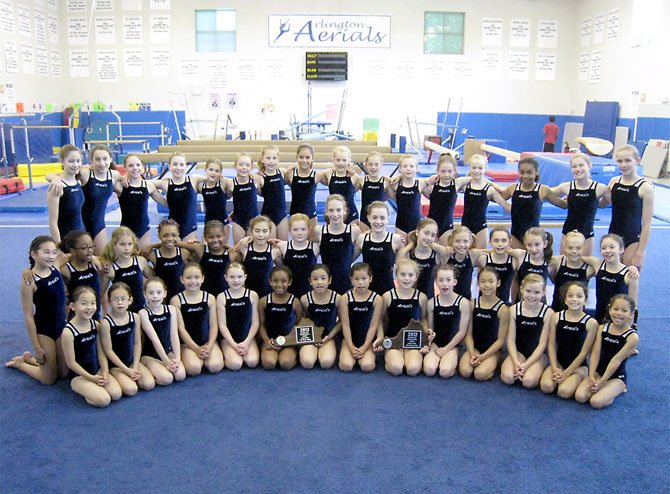 Level 4 and 5 competitors on the Arlington Aerials gymnastics team are seen with their team plaques earned at the state competition. Photograph submitted

The Bishop O’Connell softball team defeated Nansemond Suffolk, 3-0, in the Virginia Independent Schools state championship game on May 18 at the Petersburg Sports Complex. The Knights beat St. Stephen’s & St. Agnes, 6-0, in the semifinals on May 17 and defeated Flint Hill, 13-0, in five innings in the quarterfinals on May 16.

The Yorktown girls’ soccer team won its second consecutive National District championship with a 5-0 victory against Edison on May 18 in the district tournament final at Greenbrier Stadium.

The Yorktown boys’ soccer team reached the National District tournament final on May 18, where it lost to top-seeded Mount Vernon, 3-1.

The Virginia State Championship Regatta was held on Saturday, May 12, and all four Yorktown boats claimed spots in the grand final in their respective events. The men’s second varsity (2V) came home with silver medals, finishing behind a fast St. Albans boat.

In their morning heat, the men’s 2V struggled at the start. They fell a few seats back of a fired-up crew from Thomas Jefferson, and never caught up. The men finished second in their heat, qualifying them for the final.

The men’s 1V, seeded third overall, won their heat by a touch of open water over Madison and also advanced to the grand final.

In the 2V final, Yorktown got off to a much better start than in its heat and held even with the undefeated St. Albans boat for the first 400 meters. This good start got the Patriots moving on Madison and Thomas Jefferson. Once the Bulldogs of St. Albans started to pull away from the Patriots, the race was for the silver medal. Yorktown built a solid lead over both Thomas Jefferson and Madison to win the silver medal. Washington and Lee made a strong late sprint to overtake Madison and Thomas Jefferson and take home the bronze medal. 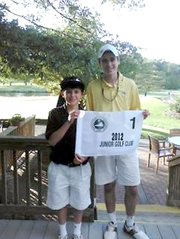 Jett Lyerly, supported by his older brother and caddy Quinn Lyerly, was a first-place winner in the 11-year old category of the Virginia State Golf Association Tournament, held on May 20 at the Jefferson District Golf Course in Falls Church. Jett, an Arlington resident, competed with golfers throughout the state.

In the 1V final, Yorktown ended up with the fastest-starting and physically strongest crews flanking them on either side. Off the start, St. Albans and Thomas Jefferson moved on the field leaving Yorktown, Washington-Lee, Westfield and Madison to battle to stay in the race. As the crews closed on the finish, St. Albans led the field by more than a length and won its third Virginia state championship in a row. In a very close race for second, third, and fourth, Washington-Lee nipped both Thomas Jefferson and Yorktown for second, with Thomas Jefferson holding on for third. Yorktown ended the day in fourth.

On the women’s side, it was a day of great racing and promising results. The Yorktown 2V women were seeded eighth going into the championship and thus were not favored to advance to the finals. Nevertheless, in their heat the Lady Patriots finished second behind Madison, beating both fifth-ranked Robinson and fourth-ranked Oakton, to advance to the grand final. In the final, the Yorktown 2V had a solid race, finishing 5th overall, with Madison winning easily with a nine second advantage over National Cathedral. In third, another boat length back was T.C. Williams.

The Yorktown women’s 1V started out the year knowing they had some work to do, having lost four seniors to college squads. Each week during the season the crew did just that, gaining speed with each race. Their hard work earned them a sixth seed coming into states, but they were in a two-to-advance heat, alongside top-ranked Madison and seventh-ranked Oakton. Yorktown had a fantastic start and jumped out front in the first 500 meters. Madison powered through them in the middle 500 meters, but Oakton couldn't make up the difference, and Yorktown finished open water in front of Oakton to advance to the final. In the final, Yorktown battled Robinson for fourth place, and in the last 30 strokes sprinted past both Robinson and T.C. Williams to finish fourth overall behind a stellar Madison crew in first, National Cathedral in second, and Thomas Jefferson in third.