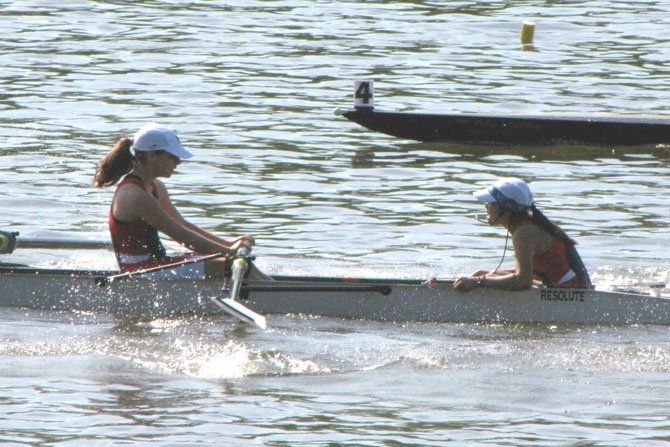 Coxswain Kathrina Policarpio shouts out commands to rower Maeve Bradley as she and other members of the T.C. Williams girls’ freshman 8 race toward the finish line during their semifinal heat at the Stotesbury Cup Regatta on the Schuylkill River in Philadelphia on May 19. The freshman girls placed second in their heat to advance to the final of the event. Photograph submitted

Coming off a solid performance at the Stotesbury Cup Regatta in Philadelphia this past weekend, the T.C. Williams crew team heads north once again this coming weekend to compete in the Scholastic Rowing Association of America’s National Championship Regatta in Camden, N.J.

Held on the Schuylkill River, Stotesbury is the world’s oldest high school rowing competition, a contest where any team is allowed to enter, but only those who make it through the time trials are allowed to compete. By that measure, T.C. Williams’ appearance at Stotes was a success. Of the seven boats T.C. raced in the time trials, six boats made it to the semifinals. Leading the way for the Titans were the girls’ freshman 8, which posted the fastest time of any girls’ freshman boat, and the boys’ lightweight 8, which posted the fourth fastest time in their group. Also making it to the semifinal heats were the girls’ first 8, girls’ second 8, boys’ varsity 4, and boys’ freshman 8.

With only two or three boats per heat advancing, competition was fierce for the six coveted slots in the final races of the day. Against this competition, the T.C. girls’ freshman 8 and the T.C. boys’ lightweight 8 once again emerged, both taking second place in their semifinal heats. A regatta that began with more than 900 boats was down to a final slate of races, each featuring an elite group of six. In the hard fought girls’ freshman 8 final, the Titan rowers finished out of the medal hunt with a time of 5:05.63, less than three seconds behind the third place boat from Bethesda-Chevy Chase.

The boys’ lightweight 8 race was marred by controversy when the crew from Moorestown (NJ) High School in the lane next to T.C. called out in unison the name of a Titan rower just before the start. According to T.C. Boys Head Coach Pete Stramese, this kind of poor sportsmanship is unheard of in rowing, and, is the equivalent of a golfer calling out the name of his or her playing partner just before they swing. The result for a golfer, he noted, is a poor shot. For the T.C. lightweight 8, the result was a poor start, which left them in a position of trying to catch up with the rest of the pack and left them out of the medal hunt in the end. Stramese has filed a protest with regatta officials and requested that the incident be reviewed and Moorestown — which finished in third place — be penalized accordingly.

This incident aside, both Stramese and T.C. Williams girls’ head coach Mercedes Kiss remain upbeat about the Titans’ performance at Stotesbury and their prospects at the national championship regatta in Camden. For the schedule of races this weekend and the remaining weeks of the Spring 2012 rowing season, visit the T.C. crew website at www.tcwcrew.org or Facebook page at www.facebook.com/alexandria.crewboosters.