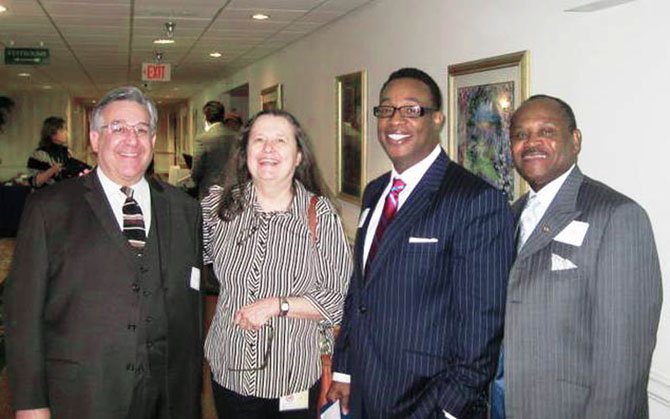 Centreville — Housing discrimination cases have been on the rise in Fairfax County in the past few years. And the Office of Human Rights and Equity Programs (OHREP), the agency that enforces fair housing laws in the county, is shining a spotlight on the problem through seminars for housing providers, Realtors, community groups and other interested parties.

“Sadly, housing discrimination is alive and well and we’ve seen an uptick in complaints during the past six years,” said Kenneth Saunders, executive director of OHREP.

Under the County’s Human Rights Ordinance, it is illegal to discriminate and deny housing based on:

For more information about how to file a complaint or to become educated about protections under the Fair Housing Act, contact the Office of Human Rights and Equity Programs at 703-324-2953, TTY 03-324-2900 or www.fairfaxcounty...

Although discrimination based on race remains an issue, Saunders reports that in recent years he has seen an increase in the number of complaints received by his office that are related to national origin or involve disability-related issues.

“If you’re still thinking this is only about color and race, you’re way behind the curve…more recently, there has been an increase in discrimination cases involving national origin and disability related issues,” Saunders said.

DISCRIMINATION COMPLAINTS, Saunders said, are not filed by one particular group. “It runs the gamut. We have complaints from Latin Americans, Asians and Pacific Islanders, as well as individuals from the Continent of Africa.”

During the past decade, Fairfax County has become more diverse. Today, 48 percent of county residents are ethnic or racial minorities, and in 2009, one-third of new residents were immigrants.

“In Fairfax County we consider our diversity to be one of our greatest assets,” said Fairfax County Board of Supervisor’s Chairman Sharon Bulova (D-At-large). “It is so important for us to make sure the rights of our minority communities are respected.”

When it comes to complaints related to disabilities, the problem matches state trends. In Fairfax County, these complaints accounted for 28.4 percent of cases from 2006 to 2010. Similarly, disability-related discrimination comprised 27 percent of complaints to the Virginia Fair Housing Office in 2010.

When it comes to disability-related issues, the county’s housing stock may contribute in part to the problem. Three-quarters of the county’s housing was built prior to 1990. The Fair Housing Act was amended in 1988 to include disability as a protected class. Fair Housing Accessibility Requirements for new multi-family buildings did not go into effect until 1991, and many of the existing structures were not originally built to meet modern-day requirements.

Although many cases may go unreported, conservatively there are four million incidents of housing discrimination in the U.S. per year, according to estimates by the National Fair Housing Alliance.

In addition to its education and outreach activities, OHREP investigates and enforces fair housing laws through the Human Rights Commission. The agency also investigates complaints related to employment, public accommodations, education and credit.

Saunders said his staff does a significant amount of education and outreach to communities with limited English proficiency. Brochures detailing rights and how to file a complaint are published in six languages – Spanish, Arabic, Chinese, Korean, Vietnamese and Amharic, the second most-spoken Semitic language in the world, after Arabic, and the official language of Ethiopia.

“Some landlords are uninformed about relevant fair housing laws, which is why we have a proactive education and outreach program for both sides – leasing agents landlords, and prospective tenants,” Saunders said.

WHAT HAPPENS when the office receives a complaint?

OHREP has 11 full-time investigators, most of whom are attorneys who are juggling 35-45 cases at any given time. When someone makes a discrimination complaint, both parties are given the option to participate in mediation. If mediation doesn’t resolve the issue, the investigation continues.

“A large percentage of our cases are resolved through mediation and conciliation, where both parties agree to meet and settle complaints,” Saunders said. “It is very rare for one of our cases to go to court.” Saunders said there’s usually a paper trail to give investigators enough evidence to determine if a case has merit.

While some cases involve blatant discrimination, others are more nuanced, a matter of one or more parties not understanding the law.

For example, in April 2010, a Fairfax County woman filed a complaint with the OPEHR alleging discrimination based on her disability, which required a dog as an “emotional support animal.”

The property manager of the rental apartments where the woman lives told her that the association has a “no pets” rule. According to the property manager, the woman did not provide any details that showed the dog had been trained as a “service animal,” and asked her to leave within a month if the dog remained in the apartment.

However, there’s a crucial legal difference between animals governed under the Americans with Disabilities Act (ADA) which requires animals to be trained so they can be out in public - and animals governed by the Fair Housing Act (FHA), said Patricia S. Fawcett, a human rights specialist and attorney with OHREP.

The confusion in this case is not uncommon among property managers.

“This was an opportunity for education… In fact, I was educated about this when the complaint was filed, and I contacted HUD for guidance,” she said. “There’s a lot of confusion out there with housing providers and the public about what’s protected and allowed under the Fair Housing Act, and what the ADA allows and requires.”

In this case, an OHREP fair housing outreach and education specialist provided free training to the property manager, and the woman was able to keep the dog in her apartment.

“The important point here is to know your rights under the Fair Housing Act,” Fawcett said.