‘Stamp Out Hunger’ Fills Pantries for the Poor
Votes

‘Stamp Out Hunger’ Fills Pantries for the Poor

Letter carriers are heroes at UCM and Rising Hope. 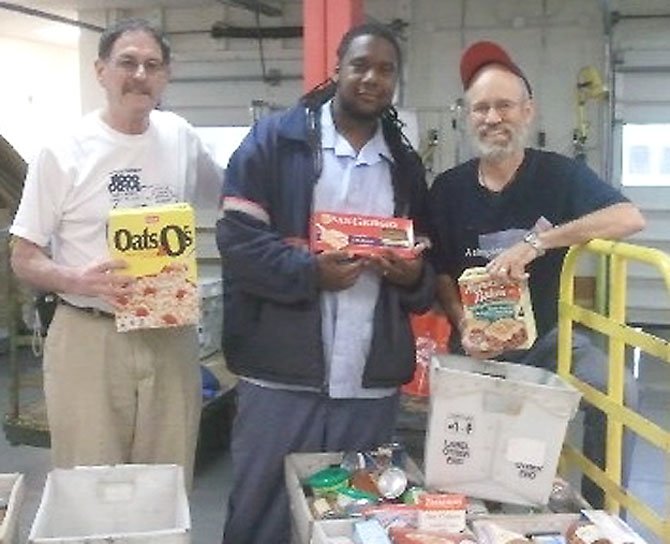 “If we don’t do it, it doesn’t get done,” says organizer Brian McCormick, right. With him is letter carrier George Holmes and a UCM volunteer.

Mount Vernon — “It’s extra work and time for the letter carriers, but they enjoy doing it, they really do. It’s amazing how a little bag here and a little bag there add up to something big,” said letter carrier Brian McCormick, volunteer coordinator for last Saturday’s “Stamp Out Hunger” food drive in the Alexandria and Mount Vernon area.

The national food drive, organized locally by Union Branch 567 of the National Association of Letter Carriers, is timed for the second Saturday in May, a critical time for food pantries bracing for summer when students no longer receive free breakfasts and lunches at school, sometimes their only meals of the day.

At United Community Ministries on Fordson Road, Niki Wanner explains that summers are tough for emergency food pantries. Wanner, who is UCM’s director of development & communications, says donors are especially generous at Thanksgiving and Christmas, but during the summer contributions drastically fall off because donors lose their awareness of the poor during vacation times.

Moreover, the desperately poor are growing rapidly in numbers due the recession.

A mile and a half south of UCM at Rising Hope Mission Church, the Rev. Keary Kincannon and pantry manager Linda Sturridge describe the same predicament.

For these workers of charity, and to those aware of the plight of the poor, the U.S. postal carriers are heroes. They volunteer to take on extra work and work late for no extra pay. Letter carriers also volunteer to pass out postcards that alert residents to the food drive, which increases loads they must carry.

McCormick, a veteran carrier with 39 years service, has been organizing the event, for no additional pay, for the past seven years.

“I remember one day I was at UCM,” he said, “and I saw a car pull up and a family go into the building for food. That car was clearly their home. As a postal carrier, I don’t often think about food because I have enough money. But there are so many in this community who can’t afford to do that.”

Said Wanner, “Participation of the letter carriers is voluntary with each local (union) branch deciding whether to undertake this daunting effort.”

McCormick wrote Wanner in an email, “I was amazed that one condo complex in Alexandria collected about a thousand pounds on their own.” Letter carriers Scott Rosenblum and Angela Thornton both deliver at Carlyle Towers on Jamieson Avenue. The former carrier of 13 years, Ron Jones, who recently died, was so greatly loved and respected the apartment staff decided to collect food in his memory.

Wrote McCormick, “When one of our postal employees went by the building to pick up the food he was overwhelmed at the response. When he brought it all back to the Memorial Annex Post Office, it filled an entire wire cage with approximately 1000 pounds of food.

“The carriers really get into it and see who can bring in the most food.

At Rising Hope, postal trucks delivered over 5,000 pounds of food. At UCM, 4,430 more pounds were delivered. “It’s about a two-week supply,” said Wanner.

Jose Fratti, UCM’s food pantry manager, said the level of donations has drastically fallen over the past 10 years. Originally from El Salvador and now a U.S. citizen, he said, “We understand the economy and people don’t have the money to spend. But we’re happy.”