Ensemble recorded the music at St. Peter’s Church in Vienna. 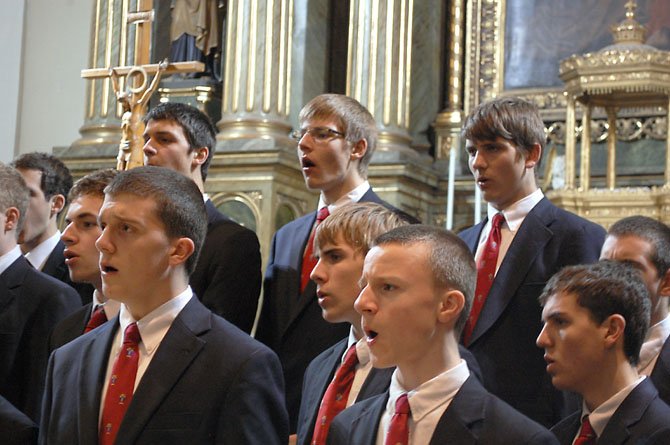 Potomac — The Heights School Men’s Chorus released its latest CD earlier this month. Their recording, “Sing dem Herrn” (Sing to the Lord), is a collection of traditional men’s choral music performed a cappella.

The group’s release is a two-CD set recorded at St. Peter’s Church in Vienna in March. “It was so humbling having the opportunity to record a CD in a venue of such historical significance,” said chorus member Wama Gbetibouo, a senior at The Heights School in Potomac.

The idea for the trip and CD was conceived and brought to fruition by Dr. Kevin L. Strother, head of music at The Heights School. “I studied in Austria for a year,” he said. “It was fun to bring students back to the place where I decided to really make music my life and my career. So it was full circle.”

The ensemble recorded sacred music for the CD in St. Peter’s sanctuary and secular music in the crypt. “The experience of seeing another culture in person was fantastic and I will carry memories for life,” said chorus member John Paul Royals, a senior at The Heights School.

Forty-one students in grades nine through 12 were in Vienna for the recording. The trip was part of the school’s Crescite Week trips, journeys made by Heights Upper School students each spring during which they take a weeklong break from the classroom to engage in adventures around the world. “It was definitely a once-in-a-lifetime experience,” said chorus member Michael Temple, a senior at The Heights School.

Strother started The Heights Men’s Chorus in 1997 with five students. The group has now grown to nearly 60. “It is (an) integral part of the curriculum,” he said. “I manage to have a quarter of the high school in the men’s chorus. It is by audition only, so I get to handpick the guys. It is an honor to be a member, but it is also fun.”

Strother says that he is proud of the group’s accomplishments and talent. “It is not a choir that only their mothers love to listen to,” he said. “I would put these guys up against most college and even some professional men’s choruses. They are not what you would expect a traditional high school choir to sound like.”

“Sing dem Herrn” can be purchased by contacting The Heights School or Dr. Kevin Strother at kstrother@heights.edu.